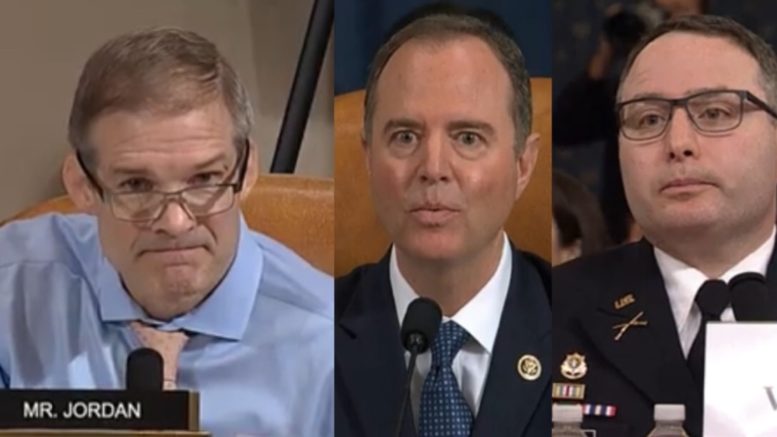 Congressman Jim Jordan (R-OH) questioned Lt. Col. Alexander Vindman, an Army officer who works for the National Security Council, and Jennifer Williams, an aide to Vice President Mike Pence, on Tuesday during in a public hearing as part of the Democratic-led impeachment inquiry into President Donald Trump.

Vindman and Williams both listened in on a July phone call that took place between President Donald Trump and Ukranian President Zelensky.

During his questioning, Jordan asked Vindman to respond to former National Security Council aide Tim Morrison’s deposition that mentioned concerns about Vindman’s judgment, adding that some of his colleagues thought that he had leaked information to the media.

Jordan said: “Page 82 of the transcript from Mr. Morrison– [He] said this, ‘I had concerns about Lt. Col. Vindman’s judgment. Among the discussions I had with Dr. Hill in the transition was our team, it’s strengths and weaknesses and Fiona and others had raised concerns about Alex’s judgment,’ when Mr. Morrison was asked by Mr. Castor. Did anyone every bring concerns to you that they believe Col. Vindman may have leaked something, Mr. Morrison replied, ‘yes.'”

In response to Rep. Jordan’s questioning, Lt. Col. Vindman read the last evaluation from Fiona Hill, a former White House adviser on Russia, and Vindman’s supervisor, that said Vindman was the “best Army officer I’ve worked with in my 15 years of government service” and “exercises excellent judgment.” (Continued Below)

“I can’t say why Mr. Morrison questioned my judgment. We had only recently started working together. He wasn’t there very long and we were just trying to figure out about our relationship,” Vindman said.

When asked if he ever leaked information, Vindman responded, “I never did. I never would. That is preposterous that I would do that.”

“Kernal it’s interesting, we depose a lot of people in the bunker in the basement of the Capitol over the last several weeks, but of all the depositions, only three individuals we deposed, were actually on the now somewhat famous July 25 phone call between President Trump and President Zelensky. There was you, there was the individual sitting beside you, Ms. Williams and then, there were, of course, your boss, Mr. Mossison, who I just read from, his deposition. When we asked Ms. Williams who she spoke to after the call about the call, she willing to answer our questions and chairman Schiff allowed her to answer our questions,” Jordan explained. (Continued Below)

“When we asked Mr. Morrison who he spoke to after the call about the call, he was willing to answer our question, and Mr. Schiff allowed him to answer our question. But when we ask you, you first told us three individuals at the NSC: your brother, and the two lawyers. And then, you said there was a group of other people you communicated with, but you would only give us one individual in that group, Secretary Kent. And the chairman would only allow you to give us that name when we ask you who else you communicated with, you would not tell us,” Jordan continued.

“I want to know first, how many other people are in that group of people you communicated with outside of the four individuals I just named?” Jordan asked, to which Vindman said, “On the call readout, certainly on the first call, there were probably a half dozen or more. … Those are people with a proper clearance and a ‘need to know’. In this case, because of the sensitivity of the call, and Mr. Eisenberg told me not to speak to anybody else, I only read out outside of the NSC to two individuals.”

“And you’re not willing to tell us who this other individual is?” Jordan asked, to which prompted Swalwell called a point of order. Vindman’s counsel asked to “enforce the rule with regard to disclosure of the intelligence officer.”

Schiff responded and said, “As I indicated before, this committee will not be used to out the whistleblower.” (Video Below)

Schiff refused to answer and told him it’s his time for questioning, but his questions should be directed to the witness or out the whistleblower.

(Related: Schiff Interrupts After Vindman Admits Giving Out Info On Trump’s Phone Call To People Outside Of White House)