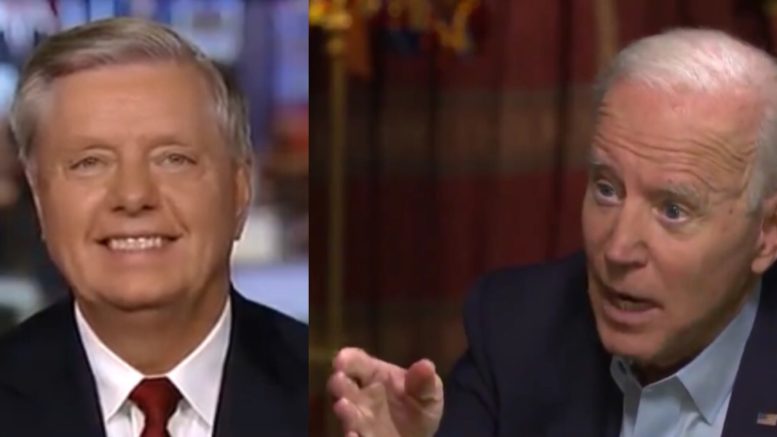 Former Vice President Joe Biden told CNN host Don Lemon, in a Friday interview in South Carolina, that he is “embarrassed for” and “angered” at Sen. Lindsey Graham (R-SC) for launching an investigation into his prior dealings with Ukraine while in the Obama White House.

On Thursday, Graham sent a letter to Secretary of State Mike Pompeo requesting documents to aid in determining whether Biden pushed for the firing of Ukrainian Prosecutor General Viktor Shokin to squash a sweeping probe into Burisma Holdings, the Ukrainian energy giant where his son, Hunter Biden, served as a board member.

In Senator Graham’s letter, he requested all documents and communications, including call transcripts or summaries, related to the Vice President’s phone calls with President Poroshenko on February 11, 18, and 19 and March 22 of 2016, especially with respect to whether Vice President Biden mentioned the Prosecutor General’s investigation into Burisma.

All documents and communications between the Vice President and his office and President Poroshenko and his office after the raid on Mr. Zlochevsky’s home on February 2, 2016, until the dismissal of the Prosecutor General on March 29, 2016. And, all documents and communications related to a meeting between Devon Archer, a business partner of Hunter Biden, and Secretary of State John Kerry on March 2, 2016.

Asked by Don Lemon about Senator Graham requesting the State Department to turn over documents related to Hunter and Ukraine, Biden said, “They’re asking Lindsey Graham –they have him under their thumb right now. They know he knows that if he comes out against Trump, he’s got a real tough road for reelection, number one.”

“I am disappointed and quite frankly, I’m angered by the fact. He knows me; he knows my son; he knows there’s nothing to this,” Biden vented. “Trump is now essentially holding power over him that even the Ukrainians wouldn’t yield to. The Ukrainians would not yield to, quote, ‘investigate Biden’. There’s nothing to investigate about Biden or his son.” (Continued Below)

“And, Lindsey is about to go down in a way that I think he’s going to regret his whole life,” Joe Biden claimed.

Asked what he would say to Senator Graham, Biden responded, “I say, Lindsey, I just –I’m just embarrassed by what you’re doing, for you. I mean, my Lord.”

"Lindsey is about to go down in a way that I think he’s going to regret his whole life," Biden says, adding Trump is "holding power" over him pic.twitter.com/sjNjQV7Ogp

Senator Lindsey Graham announced he sent a letter to Secretary of State Mike Pompeo for documents:

My letter to Secretary Pompeo and the request for information is available online.https://t.co/B4nkjelqjY

Senator Lindsey Graham explained in detail in an interview with Fox News’ Sean Hannity on Wednesday:

(Related: When Grilling Sondland, Stefanik Makes The Case For Why Hunter Biden Should Testify: “Every Witness Has Answered Yes,” There Is A Potential Conflict Of Interest)