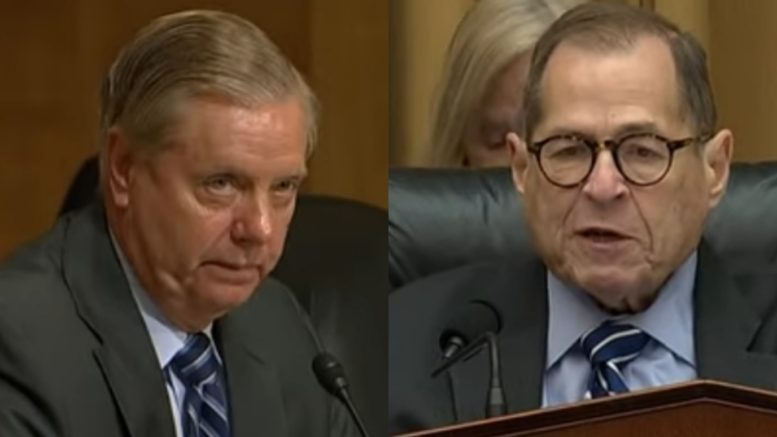 Nadler recently sent a letter to President Trump and his counsel, inviting them to the formal impeachment hearing, but reminding them that their participation is a “privilege” that can be taken away at any time.

Related Article: Nadler Invites Trump To Formal Impeachment Hearing, Warns He Could Remove That “Privilege” At Any Time

“I write to ask if … you and your counsel plan to attend the hearing or make a request to question the witness panel,” Nadler wrote in his letter and requested that President Trump responds by 6 p.m. on Dec. 1, adding, “By that time, I ask that you indicate who act as your counsel for these proceedings.”

Nadler warned, however, “I remain committed to a fair and informative process. To that end, I remind you that participate by the President or his counsel as described by the Committee in past inquiries as “not a right but privilege or a courtesy which is being extended to the President’s counsel.”

In response to Nadler’s letter, Senator Graham lashed out at Democrats over the entire impeachment process and suggested, “Salem witches got a better deal this”. See Below

“Jerry Nadler is inviting President Trump to participate in the Judiciary Committee hearings — after all the facts were gathered in Schiff’s Intel Committee — where the president’s team was shut out,” Graham said. “Salem witches got a better deal than this!”

“Will President Trump’s team be allowed to call witnesses and introduce evidence at the House Judiciary Committee?” he questioned.

“If not, square this with due process,” Senator Graham declared. See Below

QUESTION:
Will President Trump’s team be allowed to call witnesses and introduce evidence at the House Judiciary Committee?

If not, square this with due process.