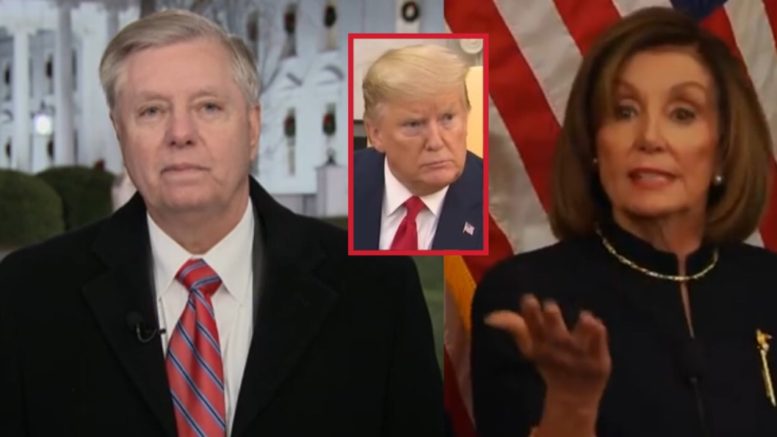 After the vote, House Speaker Nancy Pelosi (D-CA) told reporters she may delay sending the articles to the Senate until the Senate agrees to trial rules.

Asked about Speaker Pelosi holding back the articles, Senator Graham said, “The most obvious explanation is it’s the dog that caught the car, buyers remorse. They don’t know what to do. Their assumption was impeachment would sell with the American people, it’s fallen apart. They have no case and now, they don’t know what to do next. This is a political stunt that is very dangerous.”

Senator Lindsey Graham had just met with President Trump at the White House and told Bret Baier that the Commander in Chief is “mad as hell” and he is “demanding his day in court”.

“Every American accused of a crime or wrongdoing gets their day in court, apparently, except Donald Trump. … I just left [with] President Trump, he’s mad as hell that they would do this to him, and now, deny him his day in court,” he said.

Graham believes Democrats are denying President Trump his “day in court” because “they know their case sucks.” (Continued Below)

“Is the rule in law in place for Donald Trump? Everybody, including Donald Trump, should have their day in court. I’m gonna do everything I can to talk about this Constitutional outrage, denying the president the Constitutional roadmap laid out to dispose of impeachment,” Senator Graham said.

“The reason she doesn’t want to send the case over, [be]cause the case is falling apart before the American people’s eyes and it’s unfair to the president to hold this over his head. And it’s unfair to tell Mitch McConnell how to conduct the trial. It’s not Nancy Pelosi’s job to conduct the trial. It’s Mitch McConnell’s [job] working with Chuck Schumer,” he explained.

If Speaker Pelosi sends the articles to the Senate, Graham predicts the Senate will hear the House’s case, the President will weigh in on his side of the story, witnesses will be denied, adding, “I think most Senators are ready to get this over with,”. (Continued Below)

“This is the first time in American history that impeachment was started in the Intel committee, the president’s lawyers were denied access to those hearings, he couldn’t call witnesses. This thing is a sham. It is unlike anything known to the rule of law. You can’t get a parking ticket based on what they did to President Trump. They’re denying him rights to confront his accuser, to call witnesses on his behalf, to have counsel,” Graham explained.

“This whole thing is a sham. I want it to end, but we will listen to the House’s case. The President will be allowed to weigh in, then we’re gonna vote. The one thing I’m not gonna do is support a motion to dismiss. I want this president to be acquitted. I think he will get every Republican’s vote for acquittal, and I think he’ll pick up some Democratic votes for acquittal,” he predicted.

Asked about Chuck Schumer who wants to call witnesses before the Senate, Graham said: “[President Trump] was denied his ability to invoke executive privilege, instead of letting the courts decide whether or not it was a meritorious claim. [House Democrats] put an artificial time limit on this and charged him with obstruction of Congress. I don’t think there’s any appetite in the United States Senate to call a bunch of witnesses that would violate executive privilege in my view.”

“Chuck Schumer is not trying to be fair to the president, he’s trying to put 4 or 5 Senators in a political box. This has blown up in their face. Nancy Pelosi is refusing to send this over to the Senate because the case is falling apart. If you had a strong case, wouldn’t you want to present it in the Senate?” Graham wondered. (Video Below)

The South Carolina Senator concluded by pointing out how Democrats have treated President Donald Trump: “And here’s the thing I want to end on: if you were accused of something you didn’t do, wouldn’t you want to demand your day in court? So the President of the United States told me tonight that he’s demanding his day in court,” he told Baier.

(Related: Rep. Collins Steps To The Podium & Rips The Entire Impeachment Process: “This Is Not A Solemn Occasion”)