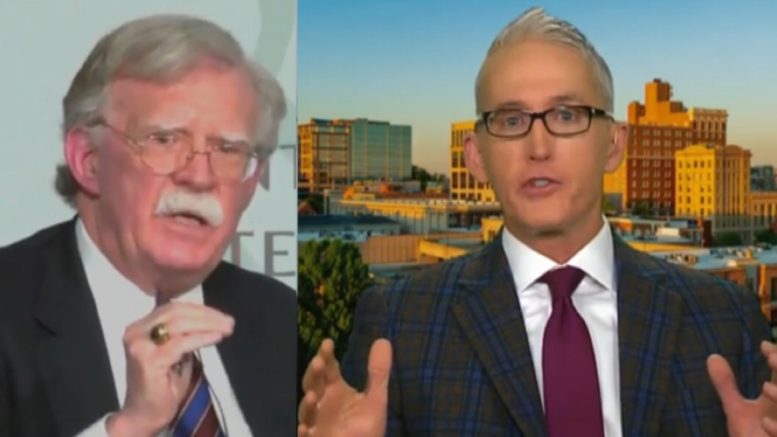 Former South Carolina congressman, Trey Gowdy, spoke with host Neil Cavuto on Fox News Tuesday on the possibility of witnesses being called in an impeachment trial in the Senate.

Senate Majority Leader Mitch McConnell (R-KY) said on Tuesday that he expects President Trump’s impeachment trial to begin on Tuesday, January 21. The House will vote Wednesday to name impeachment managers and transmit articles of impeachment to the Senate for the trial on charges of abuse of power and obstruction of Congress, Speaker Nancy Pelosi (D-CA) announced Tuesday.

Asked about the strategy and the openness of the prospect of witnesses being called in the Senate, Trey Gowdy countered, “I mean, which witnesses? The ones the House could’ve called but failed to? What’s the standard by which you get to decide whether to call a witness? Is it relevancy? That’s a pretty low standard.”

“You can’t just call a couple. There may be a Senator who wants to hear from some witnesses you and I never thought of before. What’s the standard by which you judge whether or not to add witnesses? My position is, it is the House’s job to investigate. And if they didn’t think enough to call a witness, during the investigation, then why should the Senate do it?” he asked.

Neil Cavuto said it raises an issue if Democrats get John Bolton to testify, Republicans will want Joe Biden or Hunter Biden, adding that it will go on and on.

“So you get John Bolton. Does executive privilege still apply?” Gowdy asked. “You can’t call a witness that you know is going to invoke privilege. It’s a terrible optic. You can’t do it in a courtroom, you shouldn’t be able to do it an impeachment proceeding.” (Continued Below)

(Related: Trey Gowdy On Senate Trial: “How Many Of The Senators, The Jury, Are Actually Running To Take Trump’s Job?”

“I get why people don’t like privileges, but there’s a reason we have them. And we have them because the relationship is more important than the information,” he said. (Continued Below)

Gowdy noted to be able to determine whether someone is telling the truth means “you need to eyeball them,” adding “you need to watch their demeanor, their hesitancy or the speed in which they answer questions.”

“How the hell do you do that in a deposition? I mean, I can’t think of anything more boring than having Adam Schiff read deposition excerpts to me. So how is that going to help you determine whether or not the person’s credible? You know what she or he said, but how do you determine credibility based on that?” Gowdy asked.

He doesn’t believe though that the Senate trial will last six weeks and expressed: “Talk about cruel and unusual punishment to my fellow citizens– make them watch this group for six weeks quasi-litigate a case. I mean, that is torture. It’s gonna last six weeks.”

“I don’t support the motion to dismiss because people don’t like things being summarily dismissed. Let the House present its case. Don’t they have the burden of persuasion? They’re the ones that want to remove a duly elected president. They have the burden of persuasion. Let them go, then you can entertain a motion to dismiss. I like it at the end. Go present your case, vote on it. Vote on it like a regular jury votes on it, and then if the voters want to weigh in, they can do that in November,” Gowdy concluded. (Video Below)

(Related: Gowdy Slams Schiff For ‘Making Stuff Up’ At Thursday’s Hearing: ‘If You Don’t Have Good Facts, You Gotta Make Them Up’)