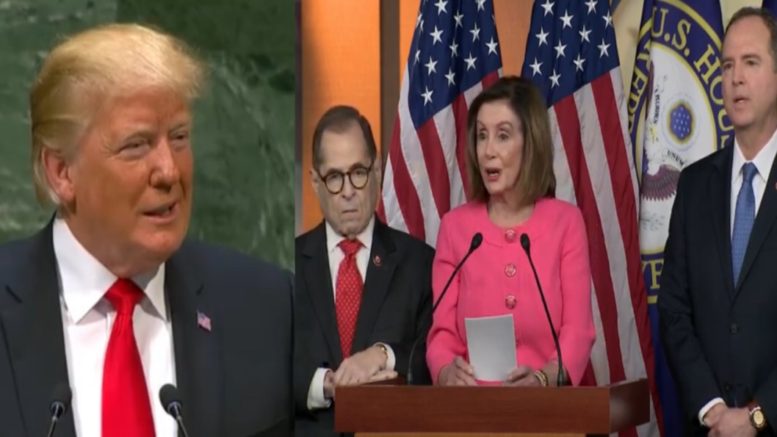 On Wednesday, House Speaker Nancy Pelosi (D-CA) announced during a press conference, the seven Democratic lawmakers who will serve as impeachment managers to present their case against President Trump in a Senate trial, after holding back the articles for nearly a month.

Pelosi claimed the charges against the president will be a stain on his legacy, and in the same breath said it was solemn, but then, bragged that she was proud.

The managers Pelosi appointed include House Intelligence Committee Chairman Adam Schiff (D-CA) who will be the lead manager and House Judiciary Committee Chairman Jerrold Nadler (D-NY), whose committee drafted the articles of impeachment.

President Trump hit back on Twitter after the House Speaker’s announcement writing: “Here we go again, another Con Job by the Do Nothing Democrats. All of this work was supposed to be done by the House, not the Senate!” (Continued Below)

Pelosi also defended her decision to delay sending the articles to the Senate for an entire month by claiming that “time has been our friend in all of this because it has yielded incriminating evidence.”

Here we go again, another Con Job by the Do Nothing Democrats. All of this work was supposed to be done by the House, not the Senate!

Cryin’ Chuck Schumer just said, “The American people want a fair trial in the Senate.” True, but why didn’t Nervous Nancy and Corrupt politician Adam “Shifty” Schiff give us a fair trial in the House. It was the most lopsided & unfair basement hearing in the history of Congress!

Today, I have the privilege of naming the Managers of the impeachment trial of the President. #DefendOurDemocracy pic.twitter.com/Y2613Ni3pC

(Related: Pelosi On Trump Saying She’ll Go Down As The Worst Speaker In History: “Let’s Be Optimistic About A Future That Will Not Have Trump In The WH”)