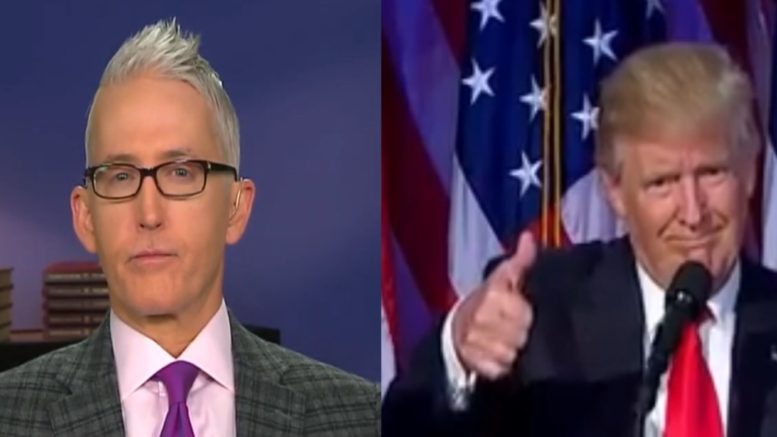 Former South Carolina congressman and Fox News contributor, Trey Gowdy, explained on “America’s Newsroom” Friday why the transcript of the July 25 phone call between President Donald Trump and Uranian President Volodymyr Zelensky is the best piece of evidence the president has for his defense during the Senate impeachment trial.

Asked if he were on the White House defense team, how would he frame the president’s defense before the Senators in the trial, Trey Gowdy simply responded, “The transcript.”

“The transcript is the single best piece of evidence that the president has,” Gowdy said.

“Who brought up Rudy Giuliani’s name?” Gowdy asked. “It wasn’t Donald Trump, it was Zelensky. This was the second call, not the first call. If President Trump were really hell-bent on ensuring that Ukraine investigates the Biden’s, would he not have brought that up in the first telephone call he had with Zelensky? Why wait till the second?”

“Who brought up Bill Barr? And under what circumstances was Bill Barr’s name brought up? I think the transcript is the single best piece of evidence that the president has. I mean, laying aside the reality that there was no announcement of investigations, there was no investigation and the aid was ultimately released,” he explained.

“I don’t think the Democrats have a great case for conviction, but also would be hard-pressed to find 5 members of this ‘jury’ that have not already made up their minds,” the former South Carolina Congressman added. (Continued Below)

“All good lawyers. What’s more important than having a good lawyer is having good facts. John Ratcliffe, I think, would have been a great addition if you’re gonna a member of the House, because of his background as a U.S. attorney. They’re good trial liars. … It sounds like he has a really good mix,” Gowdy said.

“What’s more important than having good lawyers is good facts,” he reiterated. “I expect Jay and Pat to take the lead in terms of communicating and I expect the others to be thinking, while they’re talking. You can only have one lawyer talking at a time; I’d be shocked if Pat and Jay didn’t do most of the talking in this trial,” he predicted. (Continued Below)

As far as the length of the trial, Gowdy expressed, “God help us if it lasts 6 weeks. The investigation is over. It’s [Adam] Schiff’s job to bring over and present the case. If he’s gonna present the case on the paper with the depositions, it shouldn’t take that long. I don’t need Adam to read the depositions to me. The jury can go read it themselves.”

“If they open it up to witnesses, and they want Bolton, and then there [are] some Republicans that want 4 or 5 other witnesses, it could last 6 weeks. I just have not met anyone whose opinion has changed during the pendency of this investigation. And I can’t identify– maybe 3 open-minded jurors in the U.S. Senate. No matter how long it lasts, I don’t think it’s gonna change anyone’s mind in the Senate or among my fellow citizens,” he continued.

“The shorter the better. I’m saying 2 weeks– if it goes 6 weeks, then they’re gonna have to make some hard decisions on which witnesses are important enough to hear from and which ones– while they may have relevant evidence, we just don’t… I think in terms of a real trial. Why would ever not call a witness if that witness has relevant information? How do you pick which ones to call and which ones not to? You can never do that in a real trial,” Gowdy said. (Video Below)

“So if we’re gonna open this thing up anew, to a brand new investigation, then call everybody. And God knows how long that will take,” he added.

(Related: Sen. Blumenthal Claims AG Barr May Be Now In ‘Legal Jeopardy’ As A Result Of Trump’s Transcript)