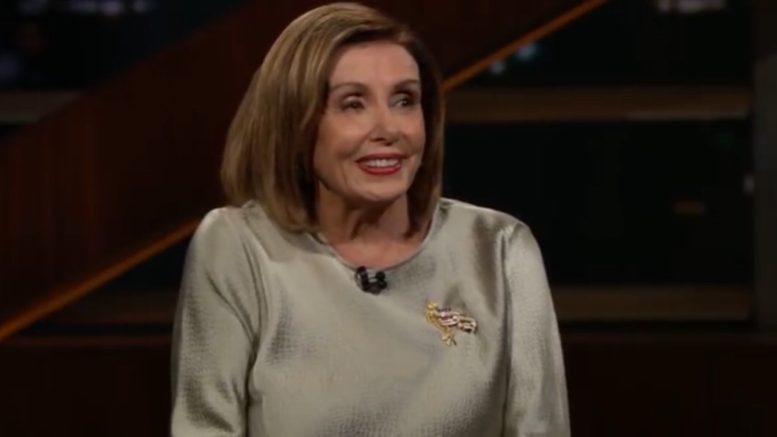 House Speaker Nancy Pelosi (D-CA) spoke with HBO’s Bill Maher on Friday to discuss the impeachment of President Donald Trump and her plan for Democrats to take back the White House.

Bill Maher told Pelosi during the interview, “There are some people who have actually said, ‘[President Donald Trump] wanted to be impeached’, and asked, “Just for the record, being impeached is a bad thing, right?”

“And you’re impeached forever,” Speaker Pelosi said as she smiled. “No matter what the Senate does, it can never be erased.”

Maher then Pelosi that “President Trump could accidentally be watching the show, … you could talk to him directly”, insinuating that she gives the president a message directly from the show.

“Right, well if I knew that the president is listening, I’d want him to know that he is impeached forever,” Pelosi stated. “And he is impeached forever because he used the office of the president to try and influence a foreign country for his personal and political benefit. And in doing so, he undermined our national security. He was disloyal to his oath of office to protect the Constitution, and he placed in jeopardy the integrity of our election.”

“And that really, he gave us no choice,” she continued. “The earlier charges that came along with the law, I said, ‘He’s not worth it’. But, once he crossed that bridge, it wasn’t a question of his being worth it, the Constitution was worth it. He had to be impeached.” (Continued Below)

Speaker Pelosi later claimed in the interview that President Trump was the “occupant in the White House”, taking a line from “the squad”.

“Here’s what I do worry about: our country and its greatness can absorb one term of the present ‘occupant in the White House’, not two terms, when it does to the courts and the rest. So what we have to do … is elect a new president of the United States. Whoever the nominee is, we must all embrace and advance. … In recent elections, we won. We showed in the House that we know how to win. Disciplined, focused, cold-blooded, … in terms of just winning,” Pelosi admitted.

The House Speaker later tweeted a video clip from the interview and wrote, “The President has been impeached – and nothing either he or Leader McConnell can do will change that.” (Video Below)

The President has been impeached – and nothing either he or Leader McConnell can do will change that. #RealTime pic.twitter.com/SVeuVW4I2g