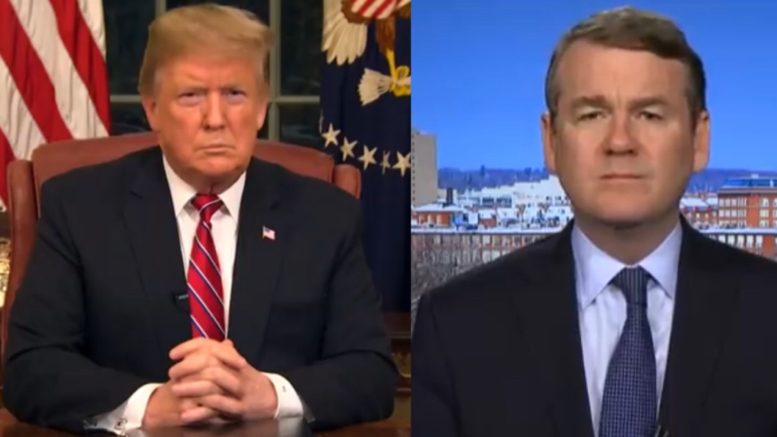 Democratic Senator Michael Bennet (CO) and 2020 presidential candidate, spoke with host Neil Cavuto on Fox News Saturday, claiming that he is the candidate who “can beat” President Donald Trump.

Bennet further was asked about running for president while also being a juror in the Senate impeachment trial against the president but deflected the question.

Republicans have called for Democratic presidential candidates, who are also Senators and will be jurors in the impeachment trial against President Donald Trump, to recuse themselves from the trial on the grounds that they cannot be impartial.

When asked about being on the campaign trail and being a juror during impeachment, Senator Bennet responded, “I think that anybody could accuse anyone else of having an inherent bias. What I would say is if they really want to have a fair trial so the American people can understand what has happened to our country over the last year, those same Senators should be for having witnesses and having records. That’s the best way we could assure that the American people can get to the bottom of the truth.”

Schiff, however, rejected the request by Republicans to have the whistleblower or any of the Republican’s witnesses testify during the impeachment inquiry hearings, claiming that the whistleblower’s testimony was “redundant and unnecessary.” Schiff himself had said in September the whistleblower would appear before Congress “very soon,” but backtracked after he admitted that his staff met with the whistleblower. (Continued Below)

Republicans have also suggested that House Speaker Nancy Pelosi is essentially paving the way for a preferred candidate to run against President Donald Trump, and forcing Democratic presidential candidates, Bernie Sanders (D-VT), Elizabeth Warren (D-MA), Amy Klobuchar (D-MN) and Michael Bennet (D-CO) off of the campaign trail, to instead be present in Washington for the Senate trial.

Asked if he “buys that”, Senator Bennet replied, “I actually don’t buy that, because I think that I am the candidate who can beat Donald Trump.” [Emphasis added].

“I heard Donald Trump say the reason we’re doing all this– is we’re trying to distract from his great economic track record. And since I know that he gets most of his talking points from this network, I want to say while I’m on this network, that the country is creating jobs at a slower pace today, than when Barack Obama was president,” Bennet claimed. (Continued Below)

Cavuto hit back at Bennet about the alleged Fox News “talking points”, saying, “If [President Trump] is getting talking points from me, then he’s going to the wrong source.”

Bennet responded, “I didn’t say from you necessarily,” to which Cavuto fired back, “You just blanketed the entire network.”

“And I don’t want Donald Trump to win,” he added, after dodging the question on being recused and impartial in the Senate trial. (Video Below)

(Related: Senator Bennet Has A Meltdown On Floor, Cruz Mops Up His Tears: ‘We Get It, They Hate Donald Trump’)