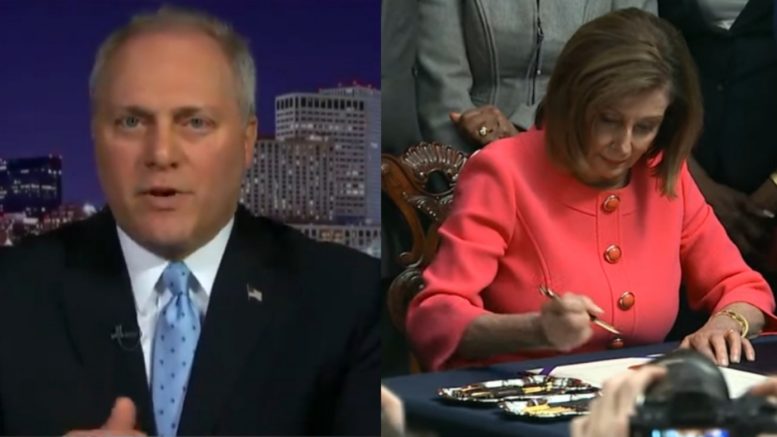 Now that impeachment is finally out of the hands of the House, Congressman Steve Scalise thinks blowback is underway for 31 Democrats who belong in districts President Trump won in 2016.

Scalise made his assessment while appearing on Saturday’s airing of Justice With Judge Jeanine.

Related Article: Jesse Watters: Is Pelosi “Just Trying To Pay Back Trump For Zeroing In On The Biden Family Shenanigans?”

“I tell you, you’ve seen it even in the polling where people — swing voters are furious with this (impeachment),” Scalise said.

Scalise continued, “And they’re being asked in their swing districts, ‘What have you been doing and why haven’t you been focusing on things that matter to me like lowering prescription drugs, like working with the other party to build infrastructure, secure the border? None of those things are happening because of this obsession Pelosi has had with impeachment.” Video Below

Mr. Scalise then pointed out how House Democrats lost Congressman Jeff Van Drew when he switched from Democrat to Republican because of impeachment.

“His reaction when he went back home was incredibly positive — people thanking him for working, basically working for them and trying to work with this President to get things done,” Scalise said in regards to Rep. Van Drew.

Going back to the 31 Democrats in Trump districts, Scalise declared, “Those are the ones that Pelosi really made walk the plank because a lot of those Democrats didn’t want to do impeachment at all.” Video Below

.@SteveScalise explains tonight that we should be working on real problems such as lowering drug prices instead of obsessing over impeachment. pic.twitter.com/sNQFLuWldS