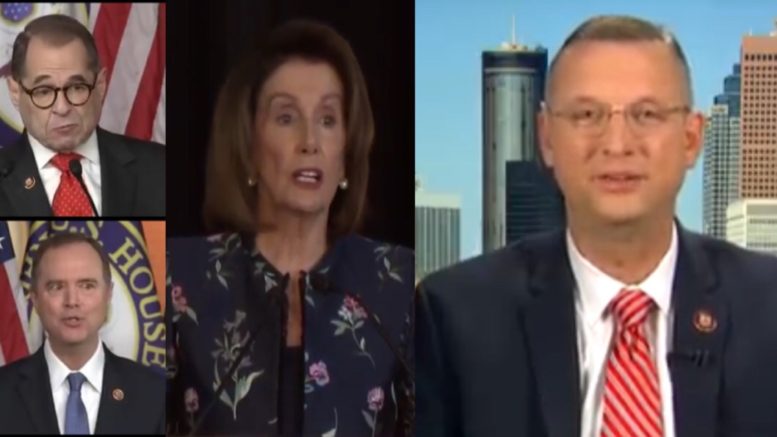 House Judiciary ranking member, Doug Collins (R-GA), spoke with Fox News Monday ahead of impeachment starting in the Senate on Tuesday, blasting Democrats who want the Senate to “do their job for them”.

“They’ve had their chance. This is the part that is the most frustrating and I’ve talked about this over and over and over again. They were on a clock and calendar to get this done before Christmas. They didn’t have any concern about getting the witnesses. They had their narrative written 18 days after the call happened when the whistleblower went to the inspector general after he had already met with Schiff in the House Intelligence Committee,” Rep. Collins explained.

The Georgia congressman said that Democrats wanted to impeach the president for the July 25 phone call, adding “That’s exactly what they got. [But] now, their case is falling apart. And the American people are seeing that their rush to judgment is actually going to cause the people to see that they really did not do their job. It’s not fair to say the Senate should do their job for them.”

“They’re trying to find anything shiny for the people to see– [to cover] how poorly they did their job, how much they ransacked the House rules to get to an outcome that they wanted. This is just a travesty perpetrated upon the American people, and the Democrats are gonna have to pay for it. And right now, they are gonna be exposed because they did not do their job,” Rep. Collins predicted. [Emphasis added]. (Continued Below)

“It doesn’t matter what evidence they come up with, nothing they have shown so far goes back to the basics– the president did nothing wrong. Remember no pressure, no conditionality. The Ukrainians didn’t even know that the aid was being held up. And in the end, they got the aid before September 30. There’s nothing here,” the Judiciary Committee ranking member insisted.

Rep. Collins also responded to House Speaker Nancy Pelosi (D-CA), who gave a fist bump to HBO’s Bill Maher over the weekend, while bragging that President Trump is “impeached forever.”

“It’s just sad, this solemn occasion wearing dark clothing and saying we’re in a ‘solemn occasion– this is a real Constitutional duty that we’re performing’. No, it’s not. You’ve been wanting to do this all along,” he said. “Your signing ceremony with your pens and your smiles and everybody [got] a pen– everybody take[s] one home.” (Video Below)

“We did it folks, we did exactly what we told the American people we’re gonna do,” Rep. Collins said of the Democrats.

“Don’t hand me that anymore, Speaker Pelosi. You’ve shown that you’re willing to lead a House off a cliff of due process for wrongs and trashing the rules of the House, to get to a president that you can’t stand. Remember this impeachment started really, the day of the election last year and also when he came down [the escalator] and said, ‘I’m running for office’. They just didn’t like him,” he concluded.

(Related: Jesse Watters: Is Pelosi “Just Trying To Pay Back Trump For Zeroing In On The Biden Family Shenanigans?”)