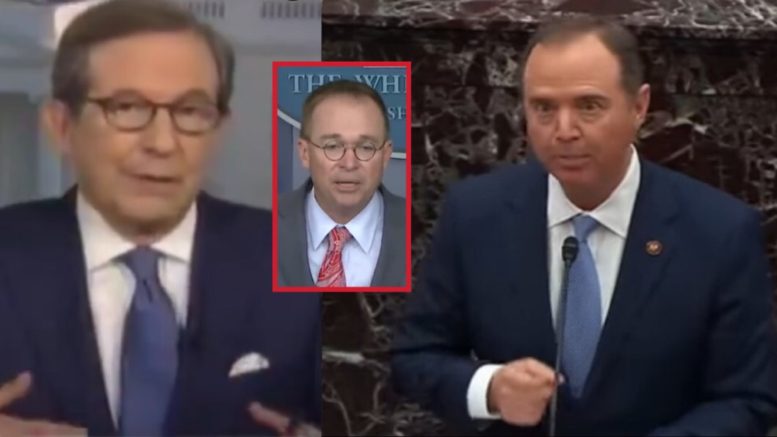 On Wednesday, Fox News’ Chris Wallace weighed in on remarks made by Adam Schiff (D-CA), announcing that the House Intelligence Chairman “completely misrepresented” remarks made by Mick Mulvaney, who serves as the Director of the Office of Management and Budget, as well as acting White House Chief of Staff.

“I just want to make one point about a specific line that Adam Schiff used a lot, ” Wallace said.

“[Adam Schiff] kept using the line, ‘Get over it’, used by Mick Mulvaney, saying, ‘Well, are we just going to get over it?'” Wallace said.

“Before I interviewed Mick Mulvaney the week of his problematic news conference, I went back and looked at that statement in detail. That’s not what Mick Mulvaney said at all,” Wallace pointed out.

“He did say ‘get over it’, but he was talking specifically about the fact that there is politics in foreign policy. And specifically, when Barack Obama is conducting his foreign policy, it’s going to have a different political flavor and policy agenda than when Donald Trump is. And each president, they’re elected, is fulfilling his mandate,” Wallace continued.

“[Mulvaney] wasn’t saying ‘this kind of quid pro quo, get over it, just accept it’. He was talking specifically about the idea of policy and politics in a foreign policy agenda,” Wallace continued (Continued Below)

“Quite frankly, and I think Adam Schiff, you know, made an effective argument for his side of the case, but he completely misrepresented what Mick Mulvaney said when he said, ‘Get over it,'” Wallace added.

Martha MacCallum agreed with Wallace saying, “We’ve seen that a few times coming from Adam Schiff, in terms of his reinterpretation, of what the president said on the phone call– that he kind of rewrote, of which the president understandably has not let him forget, and in that moment with Mick Mulvaney, as well. And even sort of the parsing of the actual transcript itself, …’would you do us a favor’, and sort of linking that to the actual activity of the request for the investigation.” (Video Below)

Schiff says Congress must consider if another president does the same things Trump did and the administration argues: "Just get over it. I'm not doing anything different than Donald Trump did." https://t.co/w84ZEmJ80g pic.twitter.com/qySxwlmEIZ