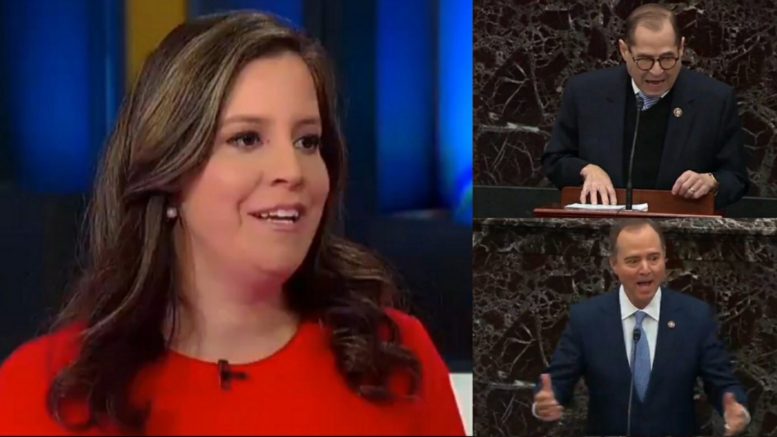 Congresswoman Elise Stefanik (R-NY) spoke with “Fox & Friends” Wednesday pushing back at the Democrats’ “flimsy” case they sent to the Senate.

Steve Doocy asked Rep. Stefanik: “Wasn’t it the job of the House to call all the witnesses and get all the information? They’ll take all the evidence and walk from the House over to the Senate and say, ‘Okay, this is what we’ve gathered, you be the jurors, you decide?'”

The New York Congresswoman replied, “That’s exactly right, and the Democrats’ case is so flimsy that they’re scrambling at this point.” [Emphasis added].

“And if you take a step back and really remember the House impeachment proceedings, Republicans were not able to call our requested witnesses,” Rep. Stefanik said.

“Adam Schiff is being completely hypocritical. The only thing he has said that is accurate is that this is an unfair trial. It’s unfair to the president,” she expressed. (Continued Below)

“If you think about– this impeachment process has been going on for 70 plus days, yesterday was the first day that the president’s legal team was even able to participate. That is unprecedented. That is not how the precedent was for both the Clinton and Nixon impeachment,” Rep. Stefanik explained.

(Related: Nadler Says Any Senator Who Votes To Deny A Witness Is ‘Complicit In A Coverup’, Collins Reacts: “Why Did He Refuse To Allow Republicans To Call Fact Witnesses?”

“So the person who limited witnesses was Adam Schiff,” she added. (Video Below)

.@EliseStefanik: the Democrats’ case is “so flimsy that they’re scrambling at this point”https://t.co/nkFVpf9n2H pic.twitter.com/gttnEkSquS