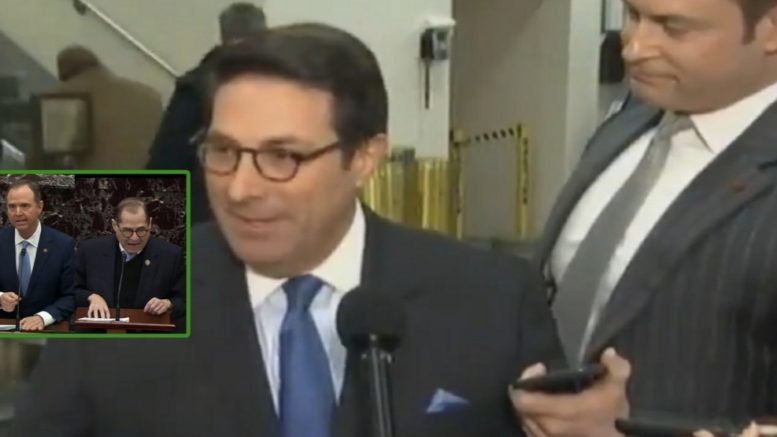 While speaking to the press on Wednesday, President Trump’s chief counsel Jay Sekulow slammed Democrats’ political impeachment as “dangerous for our republic” and said that it’s “ridiculous” that they even have to go through the process with the election only ten months away.

He also signaled that Trump’s legal team will not file a motion to dismiss and briefly gave an explanation for why they’ve made that decision.

“I think this whole fact that we’re here is ridiculous,” Sekulow said.

“I mean, think about why we’re here,” he added. “I said that at the beginning — when we spoke yesterday, which seems like two weeks ago.”

“But the truth of the matter is, why are we here? Are we having an impeachment over a phone call? Or has this been a three year attempt to take down a president that was duly elected by the American people?” he questioned. “And we’re doing this with ten months to go to a general election. Pretty dangerous for our republic, in my view.”

Related Article: Sekulow Lashes Out At Nadler After He Implies Trump Is Guilty Cause He Tried To “Hide Evidence”: “Is That The Way It Works, Mr. Nadler?”

Then, when asked why the President’s legal team isn’t going to make a motion to dismiss, Sekulow responded, “Because I want to let them (Democrats) try their case, and we want to try our case.”

“Because we believe, without a question, the President will be acquitted,” he declared. “There is not a doubt.” Video Below

Sekulow: the Democrats’ political impeachment is “dangerous for our republic”https://t.co/Aq1TWtkITU pic.twitter.com/6dYLkWVZIV