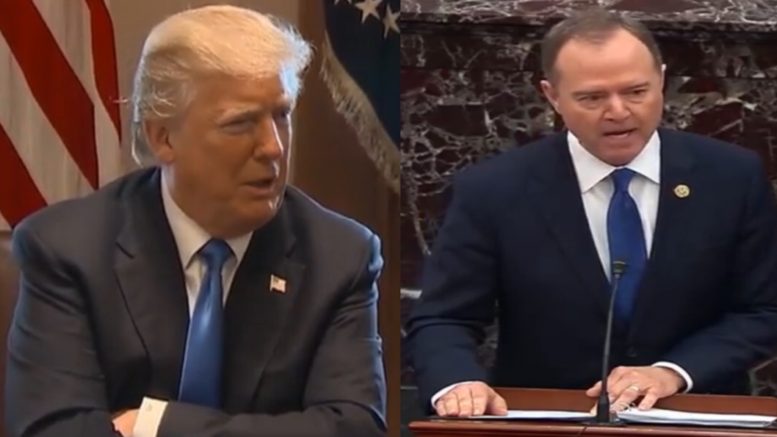 Monday on the Senate floor, during his closing arguments, House manager Adam Schiff (D-CA) suggested that if President Trump is not convicted and removed from office, he “could offer Alaska to the Russians in exchange for support in the next election”.

“If abuse of power is not impeachable, even though it is clear the founders considered the highest of all high crimes and misdemeanors– but if it were not impeachable, then a whole range of utterly unacceptable conduct in a president would now be beyond reach,” Schiff said.

“Trump could offer Alaska to the Russians in exchange for support in the next election or decide to move to Mar-a-Lago permanently and leave Jared Kushner to run the country, delegating to him the decision whether they go to war,” Adam Schiff claimed.

“Because those things are not necessarily criminal, this argument would allow that he could not be impeached for such abuses of power,” he continued. “Of course, this would be absurd. More than absurd, it would be dangerous.”

“Under this theory, as long as a president believes his re-election was in the public interest, he could do anything. And no quid pro quo was too corrupt,” Schiff claimed, even though the House articles did not charge the president with quid pro quo. (Continued Below)

“You can’t trust this president to do the right thing,” Schiff argued in his closing statements, “he will not change, and you know it.”

Further, he asserted that the president’s “daily attacks” on democracy “have made us numb and blind” to the consequences, but that truth and what is right still matters to them.

Schiff also tried to scare Senators, who may vote to acquit the president, by saying, “If you find that the House has proved its case and still vote to acquit, your name will be tied to his with a cord of steel and all of history. But if you find the courage to stand up to him, to speak the awful truth to his rank falsehood, your place will be among the David’s who took on Goliath. If only you will say, ‘enough’. (Video Below)

If Trump isn't removed he "could offer Alaska to the Russians in exchange for support in the next election or decide to move to Mar-a-Lago permanently and leave Jared Kushner to run the country, delegating to him the decision whether they go to war." pic.twitter.com/VBzkonqpmH

(Related: Schiff Lashes Out At The Senate After Being Asked About The Whistleblower, Instantly Gets Roasted)