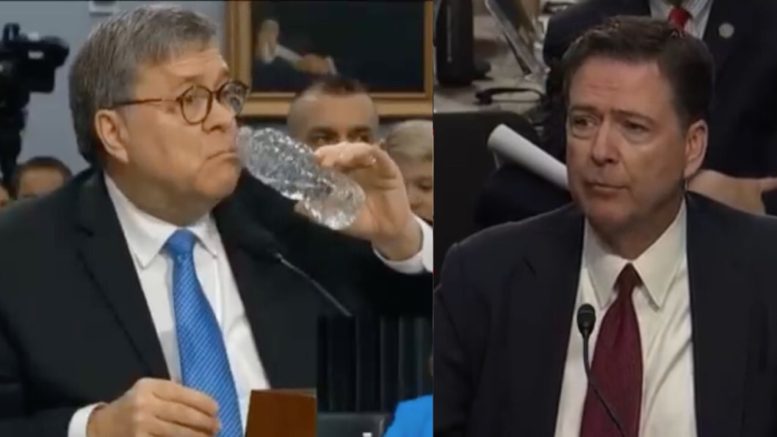 Comey’s article comes amid prosecutors handling Rogers Stone’s case, recommending between 87 and 108 months in prison. As a result, the DOJ submitted an amended filing on last Tuesday, where they told the judge that the government “respectfully submits that a sentence of incarceration far less than 87 to 108 month’s imprisonment would be reasonable under the circumstances,” but that the government “ultimately defers to the Court as to the specific sentence to be imposed.”

In his op-ed, James Comey described what the Justice Department is from his view, saying that it is “113,000 people trying to do good in every part of this country and around the world.”

“It is a hugely diverse collection of people who all depend on the same thing — an amazing gift they received on joining the department. It is a gift they might not have noticed until the first time they stood up and identified themselves as a Justice employee and said something — whether in a courtroom, a conference room or at a cookout — and found that total strangers believed what they said next,” Comey wrote.

“If Justice Department employees are no longer seen as something separate in American life, we are all less safe. If jurors, judges, victims, witnesses, cops and sheriffs come to see them as part of a political tribe, and so trust them less, something essential is lost,” the former FBI Director continued.

He went on to claim that Attorney General William Barr “threatens the reservoir of trust” of the Justice Department, and called the President “angry” and “vindictive”. (Continued Below)

Related: James Comey Admits To Chris Wallace His Handling Of The FISA Process Was ‘Not Acceptable’)

“Now, one person, Attorney General William P. Barr, threatens the reservoir of trust. From the beginning, this attorney general has echoed the president, aping his dishonest characterizations of the department’s work and appearing to respond to President Trump’s self-interested demands for new investigations and prosecutions. And the water began draining. Last week, it started gushing out when the attorney general intervened in a case involving one of the president’s friends to overrule the sentencing recommendation of career prosecutors,” Comey wrote.

“I have heard Barr say he doesn’t care about his legacy. Maybe not, but he should care about the reservoir. The people of Justice depend upon it. He should care enough about them — and the rest of us — to protect this vital American asset. The reputation of the Justice Department is more important than any of us, even an angry, vindictive president,” he further claimed. (Continued Below)

Meanwhile, the Department of Justice Inspector General, Michael Horowitz, testified before the Senate Judiciary Committee in December 2019, pertaining to his findings of the FISA report. During the hearing, the DOJ watchdog vehemently shot down James Comey’s claim that the Inspector General’s report pertaining to FISA abuses “vindicates” the former FBI director.

U.S. attorney for Connecticut, John Durham, assigned by Attorney General William Barr, has been conducting a wider inquiry into alleged misconduct and alleged improper government surveillance on the Trump campaign during the 2016 presidential election. In October, Durham’s probe transitioned into a full-fledged criminal investigation. (Continued Below)

James Comey tweeted his article writing: “The reservoir is everything.”

On the flip side, 28 years ago Joe Biden praised Attorney General Bill Barr as a “heck of an honorable guy” and someone who negotiates in good faith. The Democratic-controlled Senate confirmed Barr as attorney general in 1991, under George H.W. Bush’s administration.

As Joe Biden said, Attorney General Bill Barr is a “heck of an honorable guy” and someone who negotiates in good faith. pic.twitter.com/ZWanLW3UD9