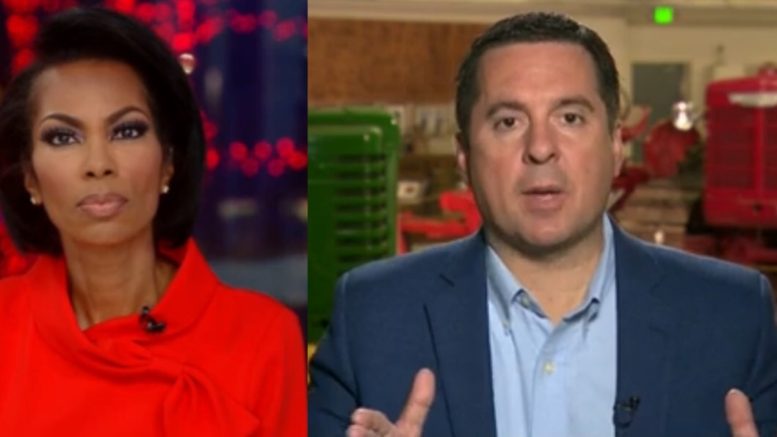 On Friday, House Intelligence Committee ranking member, Devin Nunes (R-CA), told Fox News’ Harris Faulkner that he is suing The Washington Post for false information, over a report they wrote this week, which included the California congressman.

The Post alleged that Rep. Nunes went to the White House to talk to President Trump, in regards to an official who had spoken to lawmakers about Russia.

“A senior U.S. intelligence official told lawmakers last week that Russia wants to see President Trump reelected, viewing his administration as more favorable to the Kremlin’s interests, according to people who were briefed on the comments,” The Washington Post reported Thursday.

“Trump learned about [official Shelby] Pierson’s remarks from Rep. Devin Nunes (Calif.), the committee’s ranking Republican and a staunch Trump ally, said one person familiar with the matter. Trump’s suspicions of the intelligence community have often been fueled by Nunes, who was with the president in California on Wednesday when he announced on Twitter that Grenell would become the acting director, officials said, as per The Post.

“Now look, I don’t know what planet The Washington Post is on, but they’ll have an opportunity in federal court, in the next couple weeks, to explain who their sources are because I’m going to have to take them to court because I didn’t go to the White House. I didn’t talk to President Trump, Harris,” Rep. Nunes explained. [Emphasis added]. (Continued Below)

“So, this is the same garbage, and the only way to get these guys to stop– I don’t know where they… they build a narrative, plant the narrative, they write fake stories about it, of things that shouldn’t even be talked about. You know, this classified information and then they run these stories. Who the hell is leaking this, if indeed it is true?” the California Republican congressman asked.

“Maguire was leaving anyway. …Let’s walk everybody back. John Ratcliffe was nominated. The press went after him so John Ratcliffe said, ‘Hey forget this.’ Maguire was put in temporarily. His time is coming up. Now, they’re bringing in the German Ambassador back, Mr. Grenell, to be in that position. So how on earth are people getting classified briefings– how does this end up in the pages of The Washington Post and The New York Times?” he asked. (Video Below)

“All I can tell you is that it’s total garbage and demonstrably false. I didn’t talk to the president. But you have CNN, Washington Post, all the usual suspects claiming that I went somewhere that I didn’t go. And this has got to stop. And that’s why the courts have to step in,” Rep. Nunes added.