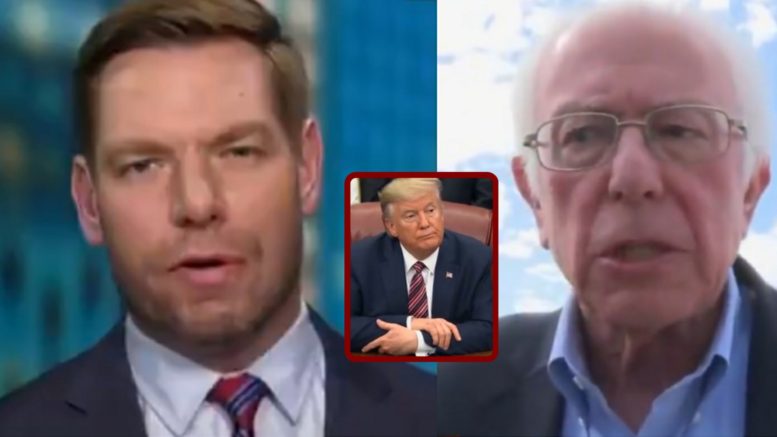 Congressman Eric Swalwell is telling Americans not to “hold it against” Bernie Sanders that he’s a preference of Russia. But on the flipside, the Democrat representative believes it’s perfectly ok to question whether or not President Trump is a Russian agent.

Swalwell made the remarks on CNN, as he was responding to the revelation that Sanders was briefed about Russia allegedly trying to assist his campaign.

“The real question,” according to Swalwell is, “Did Donald Trump know that Russia had a preference for Bernie Sanders? Because Donald Trump for the past few months has been tweeting, not so subtly and constantly, that his preferred candidate essentially is Bernie Sanders.”

He continued, “So the question is: Is he taking intelligence that he’s taking and then feeding it back to be aligned with Russia so that he gets the candidate he wants in the general election?”

Swalwell then tried to put “a finer point on what’s going on” with the alleged interference with Russia, when he stated: “You can’t hold it against Bernie Sanders that this may be a preference of Russia, but you can hold it and ask questions about Donald Trump if he, again, is working as an agent of Russia by seeking not only one, to tweet at Bernie Sanders and try to amplify his campaign to get him as a general election opponent.”

“But two, if he is indeed firing people on his staff who are telling others about Russia’s preferences, again that is Donald Trump trying to cover up things to try and help Russia,” Swalwell declared. Video Below

"You can't hold it against Bernie Sanders that this may be a preference of Russia, but you can… ask questions about Donald Trump if he again is working as an agent of Russia."@RepSwalwell reacts to reports Russia is trying to aid both Sanders and Trump. https://t.co/kek36dQBd8 pic.twitter.com/3Ihq1MfR9T

In ending, here is a widely-circulated video compilation of Bernie Sanders praising multiple Communist dictators, including former leader of the USSR Mikail Gorbachev:

This guy would have put an ice pick into Trotsky’s head for a better dacha on the Caspian Sea… pic.twitter.com/AxGUVC2xSt