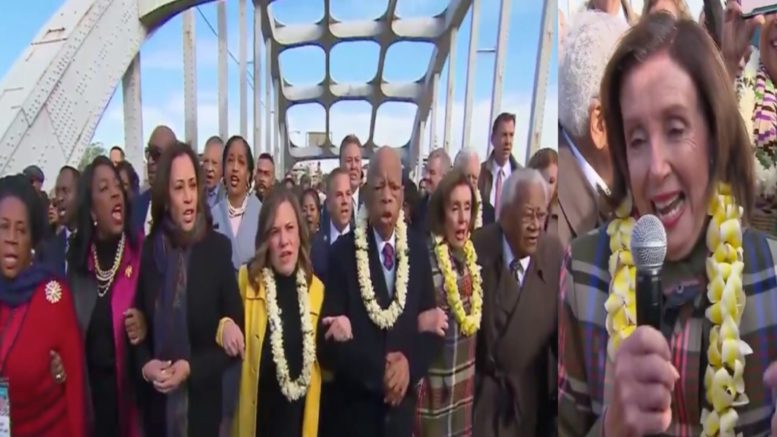 On Sunday, Rep. John Lewis (D-GA) and several other Democratic lawmakers paid tribute to the 55th anniversary of “Bloody Sunday” in Selma, Alabama.

Lewis held arms with House Speaker Nancy Pelosi (D-CA) and other lawmakers, as they marched across the Edmund Pettus Bridge to mark the anniversary of March 7, 1965, the march from Selma to Alabama’s capital, Montgomery.

As Lewis, Pelosi, and the other lawmakers walked across the bridge on Sunday, they sang a song that was sung by those who marched in 1965, “We Shall Overcome,” the anthem of the Civil Rights Movement.

A group of 600 people, including activists John Lewis set out from Selma on Sunday, March 7, 1965, a day that would come to be known as “Bloody Sunday,”. The marchers didn’t get far before Alabama state troopers wielding whips, nightsticks and tear gas rushed the group at the Edmund Pettis Bridge and beat them back to Selma. The brutal scene was captured on television, enraging many Americans and drawing civil rights and religious leaders of all faiths to Selma in protest, as reported by History.

While crossing Edmund Pettus Bridge on Sunday, Speaker Pelosi said, “I want to announce the women of the movement. Today, this is the weekend of the International Women’s Week. …And let us move to the music of the march. And let us support the faith of the faith that gave people hope. … So to all of you, what an honor it is for us to march with you again and again. … Again, let’s hear it for the women.”

As reported by History:

On March 15, 1965, President Lyndon B. Johnson went on national television to pledge his support to the Selma protesters and to call for the passage of a new voting rights bill that he was introducing in Congress.

Congress passed the Voting Rights Act of 1965, which guaranteed the right to vote (first awarded by the 15th Amendment) to all African Americans.

Along with the Civil Rights Act, the Voting Rights Act was one of the most expansive pieces of civil rights legislation in American history. It greatly reduced the disparity between black and white voters in the U.S. and allowed greater numbers of African Americans to participate in politics and government at the local, state and national level.

"Let's hear it for the women!"

Selma, Lord, Selma. We march, arms locked, understanding that we can only win this fight for freedom and justice if we join together. 🇺🇸 #FaithInPolitics pic.twitter.com/gG83M1NTbL

In my home town of Selma today with most powerful woman! Happy International Woman’s Day! Thanks Madame Speaker for leading by example! ⁦@SpeakerPelosi⁩ #InternationalWomenDay2020 pic.twitter.com/52pLzLj3XK