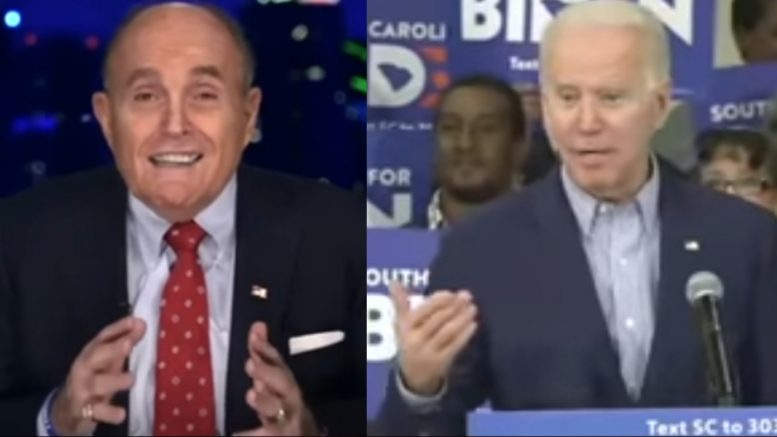 Rudy Giuliani weighed in on the current status of Democratic presidential frontrunner Joe Biden, as well as some of questionable dealings overseas involving the Biden family.

Before getting into some of the corrupt activities that he alleges Biden was involved in, Giuliani suggested the former Vice President has “something wrong with him” and when it comes to the presidency, it’s something American voters shouldn’t “pussyfoot around” with.

In reaction to the sudden turn of events that led to Biden being the frontrunner, Rudy said, “I think that Bernie was so frightening, [Democrats] picked the man that is showing obvious signs of dementia, which is astounding because if you consider what he’s still displaying gets worse, what’s he gonna be like three years from now.”

He added, “If he doesn’t know what state he is in, he can’t figure out who his wife is and if he thinks 150 million people, which is half the population roughly of America, got killed, then what’s he gonna be like two years from now when that illness gets worse?”

“We’re dealing with who is gonna be the President of the United States and we shouldn’t pussyfoot around with this,” Rudy declared.

“The man has something wrong with him and it’s serious. Not only that, his family has been stealing for 30 years,” Giuliani said before going into depth on some questionable dealings involving Mr. Biden’s family members that he thinks left-leaning media are covering up. Video Below