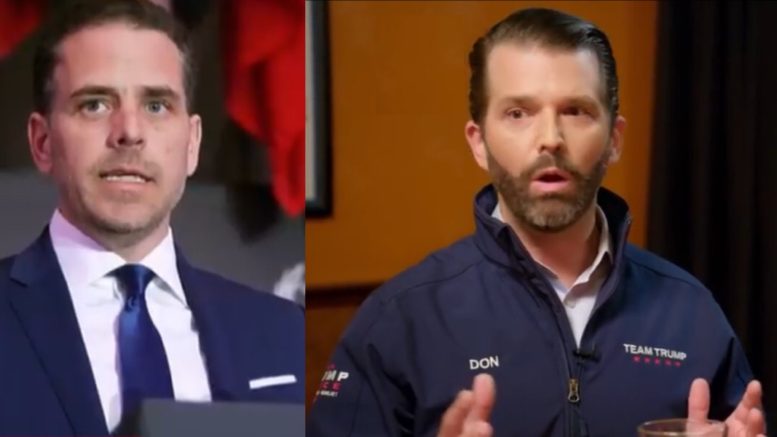 Hunter Biden’s lawyers alerted the Arkansas judge presiding over the child support lawsuit against him that he will be unable to attend his scheduled court deposition this week, citing travel restrictions caused by the coronavirus and the approaching due date of his pregnant wife, according to The Washington Free Beacon.

Donald Trump Jr. reacted as Hunter seeks to miss his court date, by asking with the hashtag on Twitter “#Where’s Hunter”?

As reported by Brent Scher from The Washington Free Beacon:

Biden was ordered last Thursday to appear at the court on Wednesday, March 11, for a deposition in the ongoing child support case, but his lawyers told the court in a Wednesday filing that Biden would be unable to attend.

“Defendant requests continuance of the hearing as he is unavailable to attend due to his wife’s due date in 2 and a half weeks or less and risks involved with travel,” the new filing states.

Biden’s lawyers further argue that it is unreasonable for him to be required to travel to Arkansas at all, saying the appearance is “burdensome and oppressive.” (Continued Below)

“It is unsafe for the Defendant to travel, as travel restrictions have been implemented both domestically and internationally, particularly on airlines, due to the coronavirus,” the filing states. “Setting aside personal endangerment, Defendant reasonably believes that such travel unnecessarily exposes his wife and unborn child to this virus. California, in particular, has been the site of numerous reported cases of exposure.”

The latest filing in the case also points to “intense media scrutiny” on Biden due to his father Joe Biden’s campaign for president.

“The tremendously elevated media scrutiny creates some physical risks and logistics difficulties with travel to Arkansas, invades the privacy of the Defendant and his 8 and a half month pregnant wife, threatens to complicate the Court’s ability to conduct a public hearing, creates a highly prejudicial environment from Defendant, and cannot be in the child’s or his mother’s interest in any way,” the lawyers argue. (Continued Below)

Donald Trump Jr. took to Twitter to react as Hunter seeks to miss his court date. He tweeted the article from The Washington Free Beacon and wrote: “Yea coronavirus… That’s it, that’s why he’s in hiding and refuses to show how much he made from his dad’s office. #WheresHunter”.

“You guys think the media would let me get away with this bullshit if I was dodging child support like Hunter?” he wondered, and reiterated: “#WheresHunter”.

Yea coronavirus… That's it, that's why hes in hiding and refuses to show how much he made from his dad's office. #WheresHunter

You guys think the media would let me get away with this bullshit if i was dodging child support like Hunter?#WheresHunter https://t.co/SaiMib0FUZ

We leave you with Terrence Williams’ response to Hunter Biden seeking to miss his court date:

WHAT IN THE WORLD?!

WHAT A LAME EXCUSE!!

HE IS A DEAD BEAT DADDY!!

**RT if you think Hunter Biden is a sorry no good father! pic.twitter.com/oR4vwIstL8