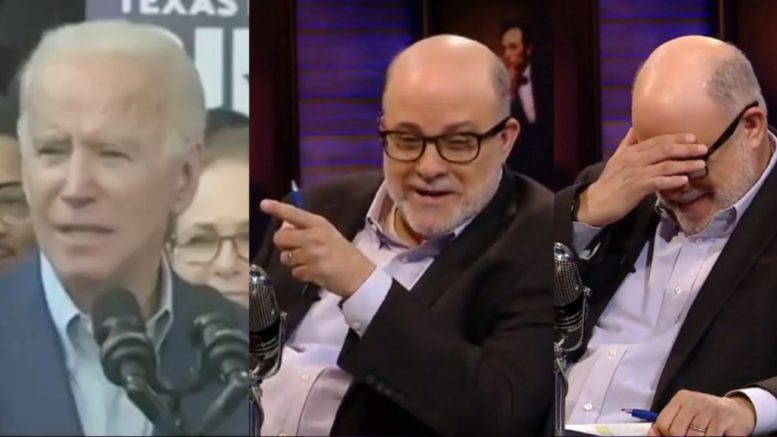 After playing video of a Sky News reporter blasting Biden as “so confused, that he has trouble remembering where he is”, an amused Levin said, “How did we get this in America?…This is great! Isn’t this great, the way she starts out like that?”

Levin couldn’t help but laugh as he carried on by showing clips of bizarre remarks made by Biden, which he labeled as “idiot things coming out of Biden’s mouth.”

Thankfully there’s another news outlet that won’t let Joe Biden off the hook.

Mark shares many of the reasons why Biden is not mentally stable to be our next President of the United States. Watch tonight on an all new LevinTV. https://t.co/D9ovz3FUWI pic.twitter.com/b5IpcZAuyH

After playing more video of Biden’s gaffes, Levin said, “You know, it’s hard not to laugh at this, but it’s very troubling. It’s very, very worrisome.”

Levin denied that Biden is just a ‘gaffe machine’ as suggested by the Sky News reporter, and instead he declared, “No, something is wrong. And we, the people, have a right to know about this.”

Mr. Levin then brought up a book written by 27 psychiatrists “trashing Donald Trump’s mental health” cause they disagreed with his policies. “They even attacked you, the people who voted and support Donald Trump,” Levin said.

“You’re not seeing any of that with Biden — any analysis of the people who support Biden,” he continued. “Are they deranged? Are they mentally ill? Are they angry white people? What’s going on with Biden’s support? We don’t know.”

“And truthfully, what’s going on with Biden?” Levin asked. “Biden is not all there. This is a fact.”

This is a fact: Joe Biden is not all there. Why aren’t the news outlets picking up on his worrisome behavior?

Biden is not a gaffe machine and Mark proves it tonight, on LevinTV. Don't miss it. https://t.co/D9ovz3XvOg pic.twitter.com/nVgtwfYGFh

In ending, here is a clip of Levin explaining how President Trump can finish off Biden at the debate stage:

If Trump demands at least five one-on-one debates, that’ll clinch the election for him.

Hear Mark share the truth about Biden and the left on tonight's, LevinTV. https://t.co/D9ovz3FUWI pic.twitter.com/UYrK1YFTHj