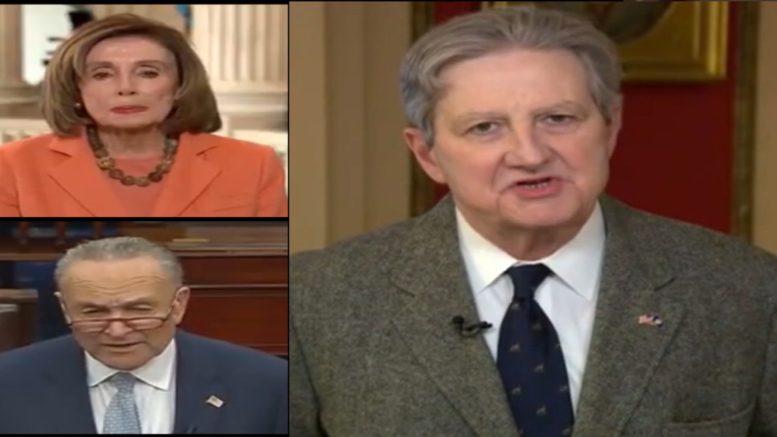 The US Senate failed to advance a nearly $2 trillion economic stimulus package to a vote on Monday afternoon as millions of Americans anxiously waited for an aggressive government response to a looming financial crisis caused by the coronavirus, reported Business Insider.

The final tally on a motion to invoke cloture was 49-46, short of the 60-vote threshold required for the legislation to proceed. Democrats refused to support the package, arguing that the aid measure failed to adequately protect workers affected by the novel coronavirus’ spread, as per Business Insider.

Kennedy said he does not if the $1.8 trillion package will work, because the Senate “can’t get the damn thing passed.”

“What Speaker Pelosi and Senator Schumer are doing here, is breathtakingly irresponsible,” the Lousianna Senator told Bill Hemmer. “Now, they’re my friends and I respect them, but they ought to hide their heads in a bag.” [Emphasis added].

“Do we know if it will work? No. I think it will, but we got to pass the bill in order to see if it works,” Senator Kennedy said.

Hemmer told Kennedy that Democrats are arguing that the bill is “front-loaded for corporations”, to which the Lousianna Senator declared, “That’s nonsense and they know better.”

“Let me tell you what they’re talking about. They’re saying there’s a 500 billion dollar slush fund. That’s nonsense. It’s called an ‘exchange stabilization fund’. It’s going to be administered by the federal reserve. They will loan money to all large companies, all comers– if they don’t qualify for the small business provisions,” Kennedy explained. (Continued Below)

“They’re not grants, they’re not bailouts, they’re loans,” he continued. “They will be collateralized. In many cases, the federal government will demand stock in the companies. The companies cant use the money for paybacks or raise executives pay. You know why my Democratic friends know all of that? Because they helped negotiate it.”

“And then at the last minute, Speaker Pelosi and Senator Schumer decided, ‘Well, this would be a good time to hold the American people hostage, and let’s try to get the Green New Deal.’ They ought to hide their heads in a bag,” he reiterated. “We would’ve had this done two days ago, if it hadn’t been for the Speaker, and if Chuck hadn’t given in to her.”

(Related: Kennedy: Right Now Americans Think “This Country Was Founded By Geniuses But Is Being Run By… Idiots”)