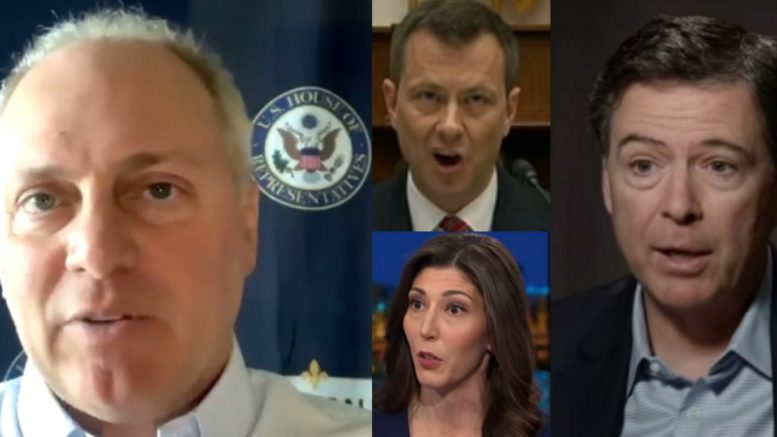 Congressman Steve Scalise thinks it’s time for some of the “dirty cops” and others who were involved in trying to ‘set up’ General Michael Flynn and President Trump to be “held accountable” and “go to jail.”

Scalise made the assessment while being pressed by Lou Dobbs for his thoughts on the “politically corrupt, toxic FBI and Justice Department” in wake of the latest revelations surrounding General Flynn.

“These were people that were very pro-Hillary Clinton people that hated Donald Trump and they were using their badge, in essence,” Scalise said. “These were FBI agents using their positions of power, abusing their positions of power to try and take down a candidate for President of the United States, and it continued when Donald Trump got elected. They literally tried to set Flynn up. Comey tried to set the President up.”

“These people need to be held accountable,” he added. “I don’t think it it stops at Strzok and Page. I think that’s just the beginning.”

Rep. Scalise then brought up the Durham investigation and all that has been learned from that alone.

“We have seen enough to know there are people that need to be brought to justice today, and I think a lot of these people are gonna roll over on folks higher up,” he declared. “And it may go as high as Comey. I wouldn’t be surprised — this all happened under the Obama Administration — I wonder if President Obama knew this was going on right under his nose with his FBI, trying to take out a candidate for President of the United States.” Video Below

“Nobody — Republican or Democrat candidate for President — should have agents of the FBI abusing their power to try to undermine and election in America,” Rep. Scalise said.

“We are already concerned about Russia,” he continued. “We need to make sure we are doing enough to stop Russia which, by the way, they tried to interfere in our election when Obama was President. But we shouldn’t have our own law enforcement agencies doing it.”

“There needs to be accountability. People need to go to jail, starting with Strzok at the top,” he concluded. Video Below

Related Article: Nunes Blasts ‘Enablers’ In The Media, Suggests They Get ‘Looked At For Treason’: “There’s Probably A Hundred Of Them”