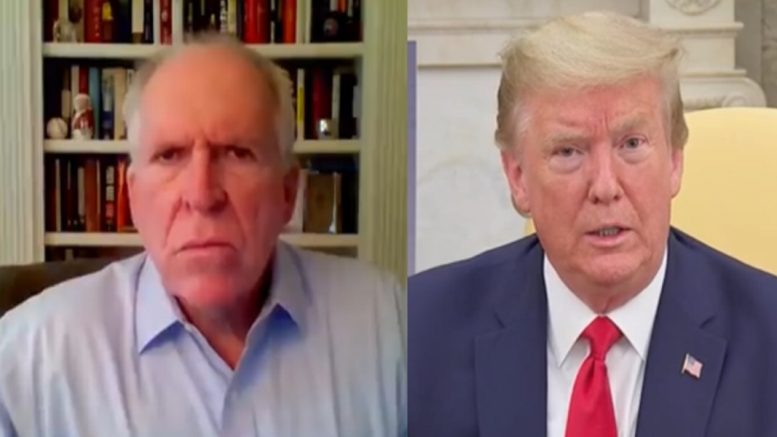 Former CIA Director John Brennan vented his frustration on Twitter Saturday at President Trump after the Department of Justice dropped its case against Army Lieutenant General Michael Flynn, and after long-delayed declassified 57 transcript interviews from 2017-2018 were released by the House Intelligence Committee this week.

In addition, Acting Director of National Intelligence Richard Grenell told House Intelligence Committee Chairman Adam Schiff (D-CA) that transcripts from the panel’s Russia probe are cleared for public release. “All of the transcripts, with our required redactions, can be released to the public without any concerns of disclosing classified material,” Grenell wrote to Schiff in a letter on Monday.

“In the interests of transparency and accountability, I urge you to honor your previous public statements, and your Committee’s unanimous vote on this matter, to release all 53 cleared transcripts to all Members of Congress and the American public as soon as possible,” Grenell wrote, while adding that he was “willing” to release the transcripts directly from ODNI “as to ensure we comply with the unanimous and bipartisan vote to release the transcripts.” Continued Below

On Thursday, Schiff released the long-delayed declassified 57 transcript interviews from 2017-2018 that reveal what was said behind closed doors when lawmakers sought to determine whether members of the Trump campaign and Russia colluded. The transcripts reveal that more than a year into the probe, senior FBI and intelligence officials could offer no specific proof of collusion between Donald Trump’s campaign and Russia.

Former Director of National Intelligence James Clapper, in the transcripts, discussed how the Russians believed Trump would be “easier to deal with” than Hillary Clinton as president. Continued Below

“I do think, though, they thought that…President Trump would be easier to deal with,” Clapper said. “He is a businessman. He’d be more willing to negotiate and make deals. And I don’t think it was anything more sophisticated than that sort of guided their objectives.”

Clapper also testified: “I never saw any direct empirical evidence that the Trump campaign or someone in it was plotting/conspiring with the Russians to meddle with the election. That’s not to say that there weren’t concerns about the evidence we were seeing, anecdotal evidence. … But I do not recall any instance where I had direct evidence.”

In an interview Friday on “Fox & Friends,” the Commander in Chief tore into what he termed “dirty politicians” behind the Russia probe a day after transcripts were released showing that top Obama officials said they knew of no “direct” evidence of collusion involving the Trump campaign.

“It was a very dangerous situation what they did,” he said. “These are dirty politicians and dirty cops and some horrible people and hopefully they’re going to pay a big price in the not too distant future.” Continued Below

“Yesterday was a BIG day for Justice in the USA. Congratulations to General Flynn, and many others. I do believe there is MUCH more to come! Dirty Cops and Crooked Politicians do not go well together!” President Trump also tweeted Friday morning, adding: “DRAIN THE SWAMP!:

Meanwhile, former CIA Director John Brennan vented his frustration Saturday on Twitter writing: “It is unsurprising @realDonaldTrump enjoys wallowing in his fetid self-indulgence, but I find it surreal that so many other government officials encourage his ignorance, incompetence, & destructive behavior. BTW, history will be written by the righteous, not by his lickspittle.”

It is unsurprising @realDonaldTrump enjoys wallowing in his fetid self-indulgence, but I find it surreal that so many other government officials encourage his ignorance, incompetence, & destructive behavior.

BTW, history will be written by the righteous, not by his lickspittle.

Twitterverse reacted to Brennan’s rant on Twitter. We leave you with a few highly engaged reactions:

This latest unhinged tweet by Obama's CIA director explains how Obama was able to so easily use Mr. Brennan, the CIA, and virtually every other intel agency to abuse the rule of law in ways never seen before in American history. @RealDonaldTrump. https://t.co/PGWNkT9uWN

Maybe @RichardGrenell can find out.

The reckoning has begun.

I read all tweets by this guy as though he’s a comic book supervillain called BRENNAN https://t.co/IWI3GZsX7C