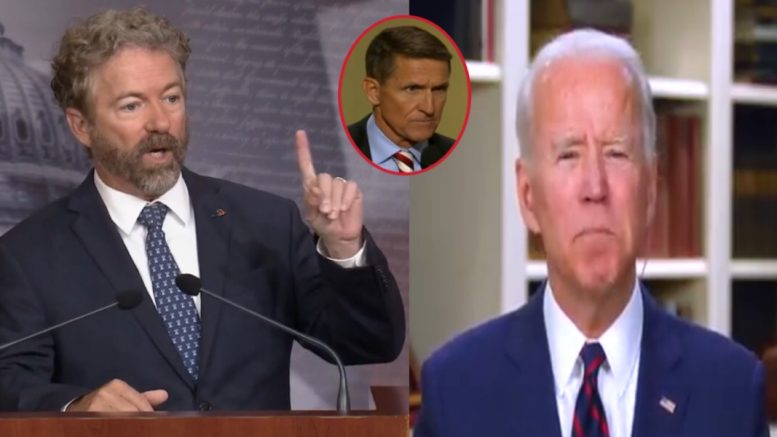 Senator Rand Paul (R-KY) on Wednesday, held a breaking news conference in regard to new information regarding Gen. Michael Flynn and is calling for acting Director of National Intelligence Richard Grenell to testify.

This comes after a memo was declassified and released Wednesday, showing that former Vice President Joe Biden and other top Obama officials received information in response to “unmasking” requests targeting Army Lt. Gen. Michael Flynn in the final weeks of the Obama administration.

The document reveals that Biden had received information at least once in response to such an unmasking request on Jan. 12, 2017.

Senator Rand Paul said on Wednesday to reporters: “We now know at the very least, [former] Vice President Biden was in this up to his eyeballs.” Continued Below

Senator Paul told reporters, “I think we need to get to the bottom of this and I think the first thing to do is interview, under oath, the Director of National Intelligence and get to the bottom of what goes on with unmasking– how unusual is this that the entire upper echelon, individually, it wasn’t like one request for this, there were dozens of requests– almost everybody in [former] President Obama’s top circle wanted to see this and listen to this conversation.”

“This isn’t about national security, this is about eavesdropping on your opponent, and eavesdropping on the new president’s top advisor. So this very, very troubling and this was being led by at least [former] Vice President Biden, if not, the president. We need to get to the bottom of it to make sure it never happens again,” he said.

Senator Paul explained the “way he sees it” is that “each of these administration officials actually individually requested to listen to this conversation,” adding: “It sounds like they were abusing [unmasking powers] to go after a political opponent, which I think is a very serious offense, and should be investigated.” Continued Below

“This is an abuse of power that should not rest, and it should make every American worry that if Vice President Biden were elevated to the top office, would he again use this kind of power on political opponents? And the other side needs to realize this is exactly what they were accusing President Trump of, but he was actually acquitted on that charge. They have now found that Vice President Biden is guilty of abusing government to go after a political opponent,” he stated. … “This is very, very damning.”

“The documents … say that Vice President Joe Biden unmasked General Flynn. And that means that he had to personally sign a document to unmask him. These are questions we can get better to the specifics of by talking to the Director of National Intelligence about how the process works. … It sounds like the entire upper circle, … that President Obama was listening to this,” Sen. Paul continued.

Asked if he will call for a congressional investigation, Senator Rand Paul immediately replied, “Absolutely”.

“We’ll start with an invitation. Today we are issuing an invitation to the Director of National Intelligence, Ric Grenell to come before my subcommittee and to testify, concerning this. … We need to get to the bottom of this. This is potentially the largest abuse that I can imagine in recent history,” he said. “The only way to get to the bottom of this is to have an investigation”

“This is not going to go away quietly,” the Kentucky Senator added.