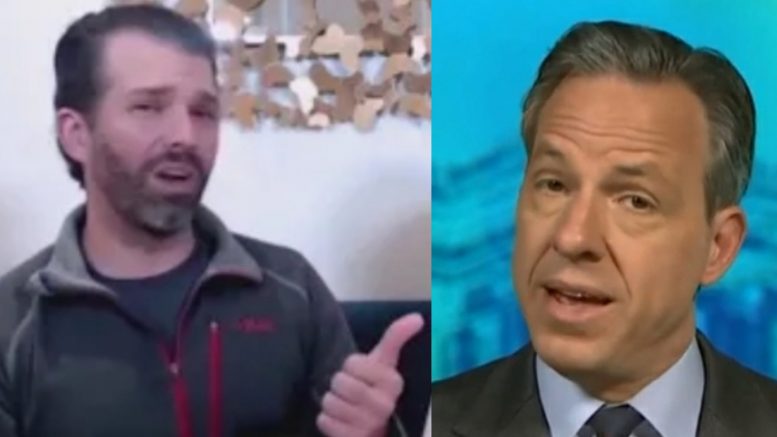 CNN host Jake Tapper faced instant backlash after he accused President Trump and his “team” of launching an “unprecedented smear campaign against rivals” on Sunday.

Tapper’s accusation came in wake of a meme Donald Trump Jr. posted on Instagram, where he jokingly depicted Joe Biden as a pedophile in reference to videos of the former VP’s past.

Tapper initially tweeted “There’s literally no bottom” in reaction to Trump Jr.’s meme, which showed Joe Biden saying “See you later, alligator”, and an alligator replying “After a while, pedophile.”

“President Trump and his team are launching an unprecedented smear campaign against rivals, leveling wild and false allegations against critics in the media and politics, ranging from bizarre conspiracy theories to spreading lies about pedophilia and even murder.

“These smear campaigns are unmoored from reality. They’re deranged and indecent and seem designed at least in part to distract us from the horrific death, health, and economic crisis caused by the pandemic. The pandemic, which impacts you, is what we will continue to focus on.” Continued Below

Twitterverse erupted soon after Tapper posted his statement, including reactions from Trump Jr. himself.

In his response, Don Jr. uploaded a two-part controversial video of Joe Biden appearing to touch, smell and whisper things to various females.

“Jake, I’m sorry that you’re more upset (Triggered!) about a joke meme than you are @JoeBiden’s gross habit of touching & sniffing young girls,” Trump Jr. said. “I can’t imagine most parents would be comfortable with Biden touching their daughters in the manner seen below…I know I wouldn’t be!”

“You’d have a lot more credibility on this stuff if you corrected even some of the lies you’ve been pushing incessantly for the last three years, but you won’t do that because you’re not a journalist you’re a liberal activist!” he added along with the hashtag #FakeJake.

Jake, I’m sorry that you’re more upset (Triggered!) about a joke meme than you are @JoeBiden’s gross habit of touching & sniffing young girls.

I can’t imagine most parents would be comfortable with Biden touching their daughters in the manner seen below…I know I wouldn’t be! https://t.co/taHQF0hEI9 pic.twitter.com/8w2gr5dT8a

Part 2 for you fake Jake. You’d have a lot more credibility on this stuff if you corrected even some of the lies you’ve been pushing incessantly for the last three years, but you won’t do that because you’re not a journalist you’re a liberal activist! #FakeJake pic.twitter.com/syJWTgE4jx

Moments later, Don Jr. retweeted the following video about Joe Biden and his son Hunter and captioned it, “I wonder if Jake Tapper and the rest at the Communist News Network and MSDNC will ever cover this? Hahahahaha, just kidding, of course he won’t, that could hurt Joe Biden and it’s his job to protect him at all costs.”

What did the Biden's offer China in return?pic.twitter.com/UMYwkS2E6Z

Here are some more responses to Tapper’s accustion against the Trump campaign:

Call me crazy, but I wouldn’t vote for someone who I wouldn’t leave my 4 year old daughter alone with for even a second. https://t.co/2HstDEkr9H

Jon Stewart in 2015 on Joe Biden: "It's apparently a Senate rite of passage that you're not officially sworn in until Delaware Joe has felt up one female member of your immediate family."pic.twitter.com/DvVdrYj1EJ

Here we go! Propaganda from the @CNN Goebbel's University Honor Graduate @jaketapper – apparently the factual reporting by @CBSNews that included @JoeBiden along with @BarackObama in illegal spying needs to be countered – and the best way to counter is with a new false narrative https://t.co/KBLXVAOYkq

If they didn’t have double standards they would have none at all.

Folks who spent years calling President Trump a traitor to his country, and attempted to destroy the life and reputation of Brett Kavanaugh, sure have interesting unsubstantiated opinions they'd like you to hear about. https://t.co/yF5cAsiy2E

If a man touched my daughter the way @JoeBiden has repeatedly handled little girls on video, we’d have a big, big problem. As a parent, would you tolerate this? Watch his hands. pic.twitter.com/tR7Npg2zgH

While we’re on the subject of “unprecedented smear campaigns” it’s a good time to remember that CNN will be paying @N1ckSandmann college tuition https://t.co/6LQklYyEPI

It's amazing one could tweet this after more than three years of relentless Resistance efforts built on not just "unprecedented smear[s]" and "leveling wild and false allegations" including "bizarre conspiracy theories" and "lies," but eviscerating of rule of law & institutions https://t.co/IE5tzFogZH

The left-wing CNN hack who personally launched the Russian collusion hoax by legitimizing a bogus dossier peddled by the bagman of a sanctioned Russian oligarch has thoughts on damaging conspiracy theories, y’all. What a clown show. https://t.co/lxt3kAQ08t

Did somebody hack this account? This nation and our President have just endured the greatest taxpayer-funded witch hunt in our history. Evidence is emerging that these hoaxes were but the tip of the iceberg. Why is that not disconcerting to so many high level journalists? https://t.co/HDJY1s3tw4

"Michael Avenatti will be here in minutes"

"The ugliest accusation in American history"

…let's make it the "lead"!pic.twitter.com/rz5hTJSW8khttps://t.co/94KBeuUmxB