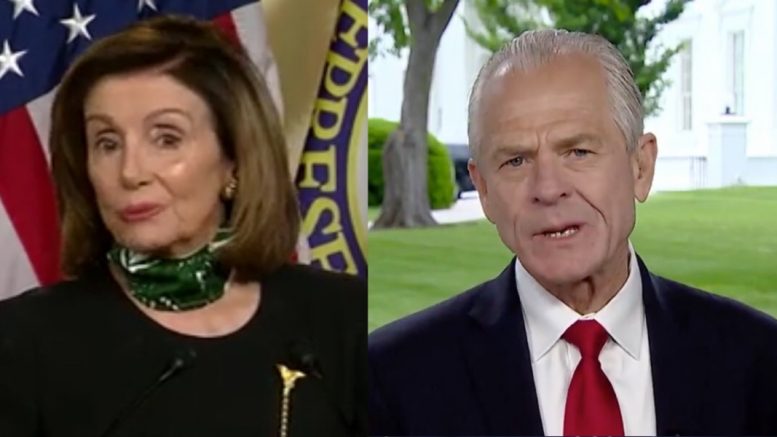 White House adviser Peter Navarro pushed back at the notion that the Democrats’ new coronavirus stimulus package would be acceptable by the Trump administration as the bill would allow illegal immigrants to receive stimulus checks.

The bill, which includes massive assistance to states and local governments suffering from the coronavirus lockdown, would allow those who use taxpayer-identification numbers to be eligible for direct cash assistance, paving the way for illegal aliens who don’t have Social Security numbers to be eligible for the $1,200 checks, Daily Caller reported.

House Republicans, however, introduced an amendment that would have prevented illegal aliens from receiving the stimulus checks, but Democratic lawmakers shot it down before passing the bill on Friday. The legislation also calls on Immigration and Customs Enforcement (ICE) to reduce its detainee population and bars the administration from withholding federal grant money from localities that refuse cooperation with federal immigration authorities, per Daily Caller.

Stephanopoulos asked Navarro during Sunday’s interview: “The House passed that 3 trillion dollar [bill]– the next stimulus package on Friday. Is that a basis for negotiation? Is the president prepared another relief package?”

“Nancy Pelosi basically lost me with that package when she has $1200 checks for illegal immigrants,” Navarro directly told the ABC host. “And it just goes downhill from there.” Continued Below

“What we have to do George, is basically go with the fiscal and monetary stimulus that we have been going through. We’ve got a lot coursing through the system now,” Navarro said. “We may need more. I’m gonna let others above my pay grade negotiate that.”

“What I’m focused on, George, and this is the real key to success, is going to be the structural adjustments we’re going to have to make. For every service sector job we might lose as we adjust to this China virus, we’re gonna have to replace that with manufacturing jobs,” he added and recommended bringing jobs back to the USA. Video Below

“Nancy Pelosi basically lost me with that package when she has $1200 checks for illegal immigrants,” Peter Navarro says when asked if Trump would sign another relief package.

"We may need more,” he adds but White House is focused on “innovation” agenda. https://t.co/q9ZfKW1rXw pic.twitter.com/vVaXJJfycy

The bill is not expected to survive in the GOP-controlled Senate. House minority leader Kevin McCarthy (R-CA) tweeted on Friday: “She seriously didn’t think anyone would read the 1,800-page wishlist she wrote in her office.”

❗️ Nancy Pelosi just got caught trying to give coronavirus stimulus checks to illegal immigrants. She seriously didn't think anyone would read the 1,800-page wishlist she wrote in her office.

NOT SO FAST, NANCY. Republicans made Democrats vote on the record on this one!