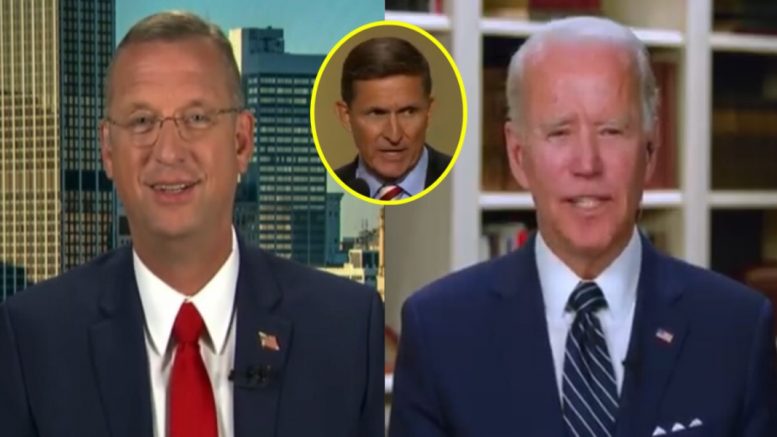 According to a memo declassified by acting Director of National Intelligence Richard Grenell and released last week by GOP Senators, Joe Biden and other top Obama officials received information in response to “unmasking” requests targeting Flynn in the final weeks of the Obama administration.

The list features officials including then-Vice President Joe Biden, then-FBI Director James Comey, and intelligence chiefs John Brennan and James Clapper. It also included Obama’s then-chief of staff, Denis McDonough. The document reveals that Biden had received information at least once in response to such an unmasking request on Jan. 12, 2017.

“We now find it in the Oval Office,” he explained. “Not the Oval Office of President Trump, but the Oval Office of [former] President Obama, who was asking about Flynn, who had had his own chief of staff unmask him the day there was a meeting. And oh, by the way, Joe Biden, were you asleep in this meeting as well, when you were actually there and told just this past week that you knew nothing about unmasking? And you actually made a request for unmasking,” he continued.

“This is the problem that we’re seeing right now, is that people are waking up to the real fact that there was an attempt to take out a candidate and then a president before he could get going,” the Georgia Congressman explained. “The American people ought to be appalled, they ought to be demanding why every news outlet is not covering this the way you have for the few last years. And many of us have been screaming at the top of our lungs that there was basically a coup attempt at the highest levels. And now, we have it faced right into the Oval Office,” Rep. Collins added. Continued Below

Rep. Collins also wondered how did the unmasking of General Flynn’s name get out to the media. “It’s amazing to look at how the mainstream media treats this president. They treat him as if he is different,” he said.

“They believe anything if he was accused of collusion or accused of doing anything else with the Russians. But when it comes to the ones that they think are the greatest in the world, the superheroes that they thought– were really nothing but a corrupt bunch of thugs going around, it looks like now. … They believe everything they say,” Rep. Collins expressed.

“What I want to see happen here, let’s hold people accountable. Somehow this information got out. We now know who unmasked. Let’s start having the investigation,” he recommended. Video Below

(Related: Biden: “I Know Nothing About Those Moves To Investigate Michael Flynn …I Was Aware … But That’s All I Know About It”)