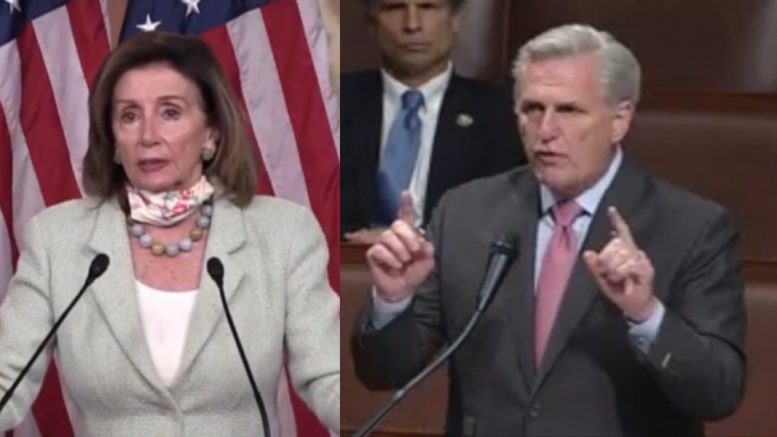 “I just filed a lawsuit in federal court to overturn Speaker Pelosi’s unconstitutional proxy voting scheme. It could allow as few as 20 Representatives to control the votes of 220. This is NOT the representative democracy our Founders envisioned or what our Constitution allows,” McCarthy wrote on Twitter.

“This week, House Democrats will break over 230 years of precedent and allow Members of Congress to vote by proxy on the House floor,” Rep. McCarthy wrote in a separate statement. “This is not simply arcane parliamentary procedure. It is a brazen violation of the Constitution, a dereliction of our duty as elected officials, and would silence the American people’s voice during a crisis.”

Under the pandemic-driven rule change, passed without any GOP votes last Friday, for the first time in the nation’s history, members will be able to direct other members to vote on their behalf as well as attend committee meetings virtually, the Blaze reported.

Though the rule is intended to be a temporary 45-day solution, Roll Call reported that Pelosi has the power to lengthen or shorten the proxy voting period based on public health information provided by the sergeant-at-arms, per the Blaze.

Pelosi called the lawsuit a “sad stunt.”, adding in statement: “The House’s position that remote voting by proxy during a pandemic is fully consistent with the Constitution is supported by expert legal analyses. Further, the Supreme Court made clear over a century ago that the Constitution empowers each chamber of Congress to set its own procedural rules.” Video Below

It could allow as few as 20 Representatives to control the votes of 220. This is NOT the representative democracy our Founders envisioned or what our Constitution allows.

This is a MUST-WATCH: pic.twitter.com/h0irMlSW6f

Meanwhile on Wednesday, Pelosi during a press conference, told reporters the coronavirus is “an opportunity, every crisis is”.

Nancy Pelosi on the coronavirus: “this is an opportunity, every crisis is”https://t.co/SEKTlwmhWQ pic.twitter.com/rs6HAlh877

House Minority Whip Steve Scalise noted that what Pelosi is doing is “unconstitutional”.

Did your Representative give your vote in Congress away to someone else so they could skip work?

Proud to join @GOPLeader in filing a federal lawsuit to overturn Speaker Pelosi's unconstitutional proxy voting scheme. As members of Congress we're elected to serve in a government of, by & for the people. It's not a job you do by video or proxy–it's a job you do by showing up. pic.twitter.com/xOr82h6REJ

Let’s face it. You gotta show up for work.

Tyranny = power in the hands of few. @SpeakerPelosi's proxy-voting scheme is flatly prohibited by the Constitution and defies the very mechanism of the People's House—to assemble for the people. Congress has a job to do—and this decision infringes on Congress' very foundation.

Speaker Pelosi’s scheme to allow voting by proxy is an unconstitutional move that reverses over 230 years of precedent—and hijacks the voice of the American people. I fully support @GOPLeader’s lawsuit opposing this measure. Read more in my press release: https://t.co/MsIhsU5QpI pic.twitter.com/A0LKF5LPa4

I have joined the lawsuit against @SpeakerPelosi for blatantly violating the Constitution. It is imperative we stop Pelosi and the Democrats from silencing the voice of the People and passing legislation with only 20 members of the House present. #PelosiPowerGrab pic.twitter.com/iUERk23CZF

You can be assured that, unless I am medically unable, I will always be in D.C. when it's time to vote. #AZ05 pic.twitter.com/RCVNQc3uc1

The Speaker of the House wants elected members of Congress to give away their votes to partisan members of leadership.

That’s wrong. It’s against the Constitution. And we’re going to stop it… Join us: https://t.co/cZkWiN31nH

Just signed on to sue Speaker Pelosi for her unconstitutional proxy voting scheme.

Americans need Congress working together in one place to help them navigate this crisis and get back to work, not phoning in their public service while their constituents have to go back to work. pic.twitter.com/N6CiTSjYER