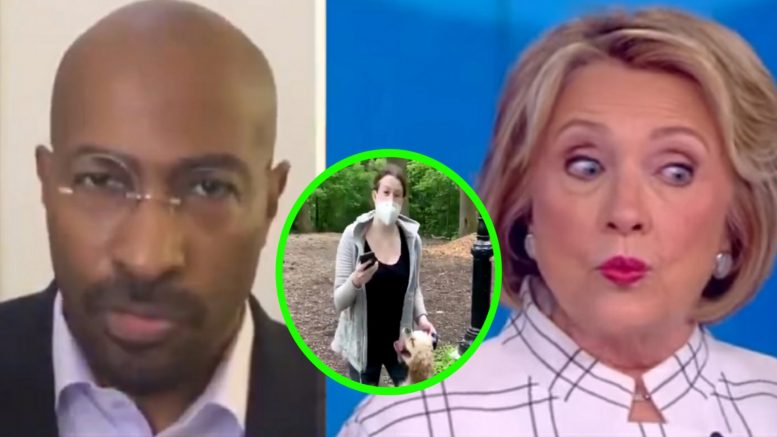 CNN’s Van Jones suggested on Friday that a “white, liberal Hillary Clinton supporter” is more worrisome than a “racist white person who is in the Ku Klux Klan.

Jones gave his assessment in reaction to the viral video of Amy Cooper, the 37-year-old white physical therapist from Manhattan, who called the police on a black man after he politely asked that she put her dog on a leash, which is a strict rule in New York’s Central Park.

Cooper is seen calling the police and accusing the “African American man” of threatening her and her dog, although the video indicated otherwise. Cooper’s dog also appears to be choking and struggling to breathe.

In reference to the video, Jones said, “It’s not the racist white person who is in the Ku Klux Klan that we have to worry about. It’s the white, liberal Hillary Clinton supporter walking her dog in Central Park who would tell you right now…’Oh I don’t see race, race is no big deal to me, I see all people the same, I give to charities.’ But the minute she sees a black man who she does not respect, or who she has a slight thought against, she weaponized race like she had been trained by the Aryan Nation.”

“A klansmember could not have been better trained…to pick up her phone and tell the police it’s a black man, African American man. Come get him, ” Jones declared.

“So even the most liberal, well-intentioned white person has a virus in her or her brain that can be activated in an instant,” he added. Video Below

Related Article: Trey Gowdy On George Floyd’s Death: “This Is Murder. This Is Either Murder One, Two Or Three Under Minnesota Law”

Jones went on to say, “What you’re seeing now is a curtain falling away. And those of us who have been burdened by this every minute, every second of our entire lives are fragile right now.”

“We are fragile right now. We are tired,” he concluded. Video Below

CNN’s Van Jones on threats to blacks: “It is not the racist white person who is in the KKK that we have to worry about. It is the white liberal Hillary Clinton supporter walking her dog in Central Park … she weaponized race like she had been trained by the Aryan nation” pic.twitter.com/g1gp3k7aFt