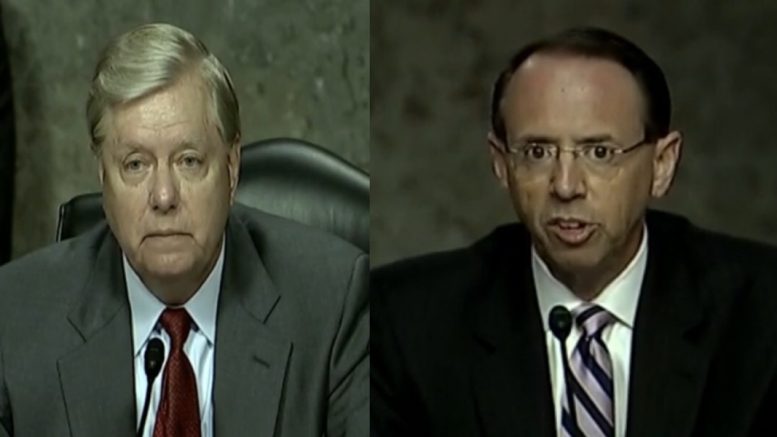 Former Deputy Attorney General Rod Rosenstein testified before the Senate Judiciary Committee on Wednesday pertaining to the oversight of the Russia investigation.

Chairman Lindsey Graham (R-SC) began the hearing by showing a video clip of Rosenstein explaining the FISA process in May 2018. Graham then declared after the video that the FISA process into Crossfire Hurricane was not conducted properly.

“We know now that the Horowitz report that was delivered to this committee December 29, 2019, that the FISA warrant application process did not work the way Mr. Rosenstein described it in 2018. What do we know? We know that exculpatory information was withheld from the court. We know from Mr. Horowitz, without the Steele dossier, paid for by the Democratic Party, prepared by a former British agent, working with a Russian sub-source– without that dossier, there would’ve been no warrant issued against Carter Page. We also now know that an email was doctored to get the FISA warrant by a lawyer at the FBI,” the Senate Judiciary Committee Chairman said in his opening.

“So why are we here? How did that happen?We’re trying to find out how Crossfire Hurricane got so off script. And our desire is to make sure it never happens again. Every American should be concerned that the Inspector General found criminal wrongdoing, abuse of power, and a warrant application against Carter Page. And we’re here to find out who knew what and when. … Now it’s important find out what the hell happened. What evidence, if any, was there in May 2017 when [Robert] Mueller was appointed by Mr. Rosenstine that anybody on the Trump campaign was colluding with the Russians? Was there a lawful predicate to appoint Mueller to begin with?” Senator Graham asked.

Upon grilling Rod Rosenstein, the former deputy attorney general told Senator Graham that he did not know at the time that the sub-source told the FBI the Steele dossier was a bunch of “garbage and bar talk”. He also told Graham that he “hopes not”, when asked if Andrew McCabe knew, who was in charge of the investigation.

“I believe Mr. McCabe was not fully candid with me, certainly wasn’t forthcoming. In particular, Senator, in regard to Comey’s memorandum of his interviews with the president and with regard to the FBI’s suspicions about the president, Mr. McCabe did not reveal those to me for at least a week after he became acting director, despite the fact that we had repeated conversations focusing on this investigation, and for whatever reasons, Mr. McCabe was not forthcoming with me about that. … From my perspective, Senator, they’d been conducting this investigation for I believe, approximately 9 months,” Rosenstein told Graham. Continued Below

Asked about the scope memo, in which it outlined the authority of former Special Counsel Robert Mueller’s investigation, Rosenstein admitted “it came from the Mueller team and the team he set up to interface with the the Mueller team”. Former FBI agent Peter Strzok and FBI lawyer Lisa Page were working with Mueller, he told Graham.

Asked who provided the information in the scope memo, Rosenstein said it came from “discussions between Mr. Mueller’s team and information from my team.”

Rosenstein also admitted that he relied on information from the agents to be accurate, but did not essentially vet the information before signing off on it. “So the same people that gave you the warrant application, also gave you the scope investigation for Mueller,” Graham said. “So that’s why were here, to find out how much we can trust these people.” Continued Below

Rosenstein told Graham the original crime to start the Mueller investigation was the “Russian influence operation”.

“Can you tell us what evidence existed that General Flynn was colluding with the Russians in May 2017?” Graham asked, which Rosenstein said he “couldn’t commit on the case”, but said he did not know that the FBI field office said “we recommend that General Flynn be removed from Crossfire Hurricane”.

“Would that have mattered if you had known that?” Graham then asked, which Rosenstein said, “Yes.” He also admitted that he didn’t know there was recordings of George Papadopolous saying he never worked with the Russians and if the campaign did that, it would be treason.

“The point is, when you made this appointment, the people named in it, there’s zero evidence they were working with the Russians. Zero. And this went on for two years. 25 million dollars and people had their lives turned upside down– that General Flynn– January 4, 2017, the FBI agents who’d been looking at him said they recommended him to be dropped, and our good ole buddy Strzok said, ‘No, the 7th floor wants to look at him.’ If you’d known that, would you have asked more questions?” Graham asked, which Rosenstein replied, “Yes.” Video Below

“Knowing what you know now, do you have any reservations about making the Mueller appointment, given the fact that all the people named in this scope letter, there’s like zero evidence by May 2017, they were working with the Russians? Do you have any concerns at all? Graham asked.

Rosenstein said he made the decision on the information he had based at the time, but Graham fired back and asked, “Why did we have the investigation at all if we had concluded they weren’t working with the Russians? … The point is, the whole concept that the campaign was colluding with the Russians– there was no there-there in August 2017. Do you agree with that General statement or not?” Graham wondered.

“I agree with the statement,” Rosenstein admitted.

Sen. @LindseyGrahamSC: "Now it's important find out what the hell happened." pic.twitter.com/g0qOWfy3dy