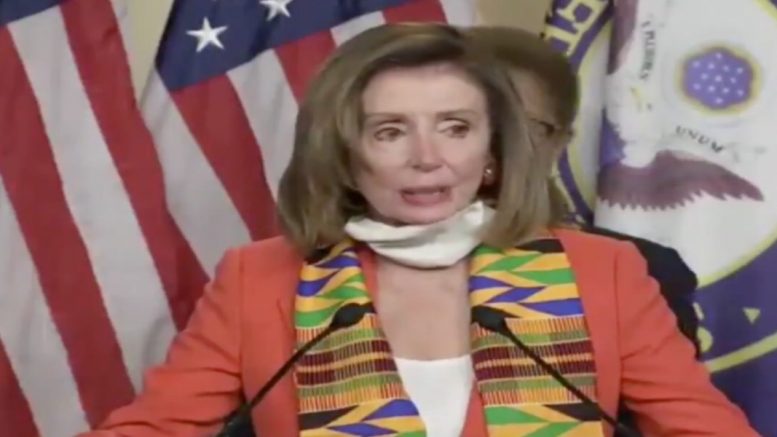 Many top Democrats appear to be reluctant to speak out against the movement to “defund the police,” in the wake of national protests and following the death of George Floyd. Moreover, they have not criticized the Minneapolis City Council for moving to disband the Minneapolis police.

House and Senate Democrats on Monday held a news conference to unveil sweeping new legislation that, if passed, would increase accountability of police officers by banning certain practices and curbing immunity from legal consequences stemming from acts committed in the line of duty, Fox News reported.

During the Monday news conference, the “defund the police” calls were not explicitly discussed as lawmakers guided the discussion more toward reform efforts.

Asked if lawmakers “support the defund the police movement”, House Speaker Nancy Pelosi (D-CA) stepped to the podium Monday to tell a reporter, “I think the congresswoman answered your question very clearly.”

“The fact is that we do have a great deal of legislation coming down the pike that addresses some of the concerns of our communities across the country. One of them that I wish the Senate would pass right away is the Heroes Act. In the Heroes Act, we support community, state and local governments. We support the disparity in the coronavirus for the tax communities of color, and we hope that the Senate would not ignore that and would pass legislation. And we would hope that we’d put more money in the pockets of people that really need that now,” Pelosi said.

Later, Pelosi and Senate Minority Leader Chuck Schumer (D-NY) were asked by CNN reporter Manu Raju if they supported the movement to defund the police entirely. Continued Below

“That’s a local decision,” Pelosi reportedly said, noting that they would have “those debates at the local level.”

“That doesn’t mean we’re going to pile more money on to further militarize police,” she reportedly added, without directly addressing whether she supports the radical idea that some activists are demanding.

When asked where House Majority Whip Jim Clyburn (D-SC) stood on the issue, his office told Fox News that: “Whip Clyburn supports restructuring police departments to ensure resources are deployed to protect and serve all Americans equitably.” Video Below

Joe Biden’s campaign, however, came out Monday against the growing push to “defund the police,” saying instead that the Democratic presidential nominee supports the “urgent need for reform.”

“As his criminal justice proposal made clear months ago, Vice President Biden does not believe that police should be defunded,” Biden campaign Rapid Response Director Andrew Bates said in a statement Monday. “He hears and shares the deep grief and frustration of those calling out for change, and is driven to ensure that justice is done and that we put a stop to this terrible pain.”

Just asked Pelosi and Schumer if they back the defund the police movement on the ground, and Pelosi answered, saying: “That’s a local decision” and they’ll have “those debates at the local level.” “That doesn’t mean we’re going to pile more money on to further militarize police.”

"Biden does not believe that police should be defunded. He hears and shares the deep grief and frustration of those calling out for change, and is driven to ensure that justice is done and that we put a stop to this terrible pain. Biden supports the urgent need for reform…" pic.twitter.com/k0IConBSj3

Meanwhile, Minneapolis’ left-leaning City Council members on Sunday announced a veto-proof push to disband the Minneapolis police, even as the mayor made clear he does not support abolishing the department, Fox News reported.

Democrat Rep. Val Demings (FL) told CBS “This Morning “the council is being very thoughtful” pertaining to Minneapolis on dismantling the police.

Democrat Rep. Val Demings refuses to criticize the Minneapolis City Council for dismantling the police: “the council is being very thoughtful”https://t.co/JNE5V7mXnp pic.twitter.com/9QVJjLhiyr

Los Angeles Democratic Mayor Eric Garcetti plans to make cuts up to $150 million to the city’s police department and redistribute the money to “black communities and communities of color.”

New York City Mayor Bill de Blasio announced over the weekend that he will be diverting funding for the New York Police Department toward social services. “The details will be worked out in the budget process in the weeks ahead. But, I want people to understand that we are committed to shifting resources to ensure that the focus is on our young people,” he said.