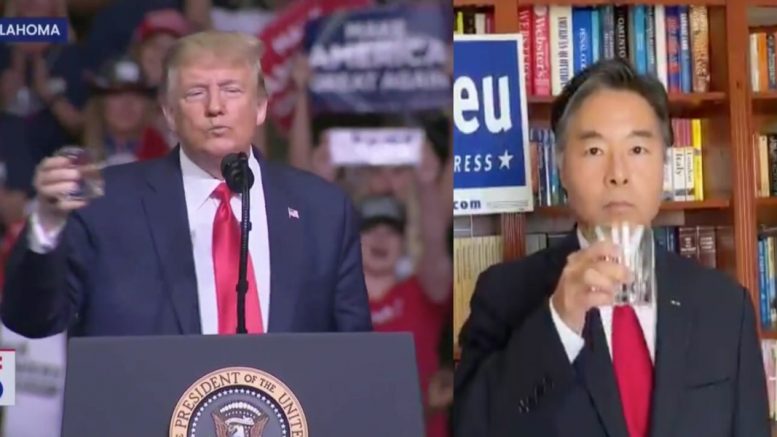 Saturday during his Tulsa, Oklahoma rally, President Donald Trump torched the media coverage over his walk down a ramp and about the way he handled a glass of water during his appearance at the West Point commencement ceremony last week.

This comes after some members of the mainstream media claimed President Trump’s health was appearing to be declining.

President Trump first responded to speculation about the viral ramp moment on Twitter writing: “The ramp that I descended after my West Point Commencement speech was very long & steep, had no handrail and, most importantly, was very slippery. The last thing I was going to do is ‘fall’ for the Fake News to have fun with. Final ten feet I ran down to level ground. Momentum!”

Maggie Haberman of the New York Times tweeted about President Trump drinking water at West Point: “Mr. Trump held the glass with his right hand and brought it to his mouth, but appeared to momentarily have trouble lifting his arm farther. He used his left hand to push the bottom of the glass so that it reached his lips,” she wrote, attaching a Times article.

During the Tulsa rally, President Trump delivered his rebuttal after media speculation about his health, saying “These people are sick, the fake news,” and he proceeded to show the crowd that he was capable of drinking from a glass of water, before throwing the glass to the floor as the crowd cheered.

Following his rally, Rep. Ted Lieu (D-CA) took to Twitter on Sunday, appearing to mock the Commander in Chief with a video of himself drinking a glass of water.

“Today I released my first campaign ad. It was produced by my kids. Let me know if you like it,” Lieu wrote.

In his video, he takes a sip of water with one hand, then copies the president by throwing the glass to the floor. Video Below

President Trump torches the media over the way he drank water at West Point:

Trump just roasted the press for attacking him over drinking water with two hands, drank with one hand, then literally threw the glass 😂😂😂 pic.twitter.com/7poE0H9F6L

Today I released my first campaign ad. It was produced by my kids. Let me know if you like it.https://t.co/OeXvghcnGv pic.twitter.com/CuFKMzdrZB

President Trump’s full remarks over the ramp and drinking water at West Point:

(Related: Ted Lieu Gets Frustrated As Pompeo Avoids Answering His Question On The Coronavirus: “It Is A Gotcha Moment”)