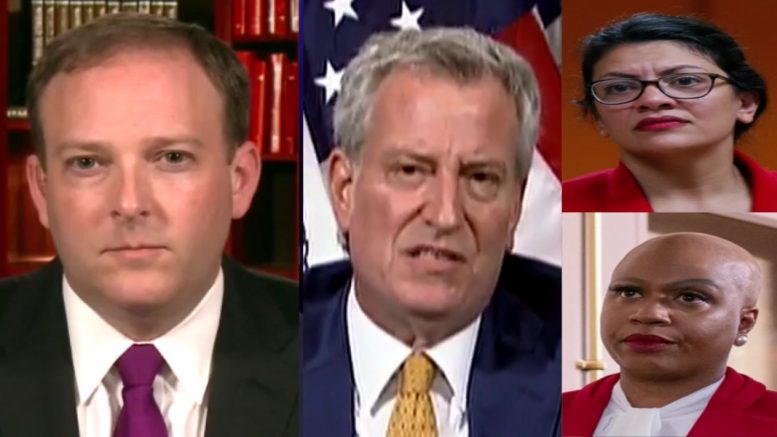 New York Republican Rep. Lee Zeldin spoke to Harris Faulkner on Fox News’ ‘Outnumbered Overtime’ on Wednesday, calling for New York Mayor Bill de’ Blasio to be “immediately removed from office to save the city and protect the people who live there”, adding that the city “won’t survive him staying in for the remainder of this term.”

Zeldin also weighed in on Reps. Rashida Tlaib (D-MI) and Ayanna Pressley (D-MA), who introduced the BREATHE Act on Tuesday, a wide-ranging proposal to defund the police, abolish ICE, and establish a reparations program for African Americans and people harmed by the police and the criminal justice system.

Rep. Lee Zeldin said on Wednesday amid calls for Mayor Bill de’ Blasio to resign: “I love New York City. … Mayor Dinkins left and you had Rudy Giuliani come in [in 1994]. There was a focus on quality of life. [Rudy] saw the crime rates go down, the economy flourishing, the potential being reached,” Zeldin said. “Here we are again, fast-forward through what has really been a terrible few weeks and months with the city going in the wrong direction. It’s at a crossroads.”

“I really believe he has to be removed and the city wont survive with him staying in for the remainder of his term,” he added.

According to the New York Post, which cited police data, the number of shootings in New York has nearly tripled over the past four weeks compared to the same period last year. The number of victims of gun violence jumped to 304 from 100 last year. Continued Below

Responding to legislation introduced by Reps. Tlaib and Pressley, Congressman Zeldin reacted saying, “This is a vision for eroding public safety. I look at our great ICE agents and the mission they do to combat sex trafficking, human trafficking, they go after MS-13, they removed people from our country that are committing some very serious crimes– the DEA, the need for us to be focusing on heroine- opioid abuse epidemic in our country– to what they’re seeking to do in removing laws that criminalize illegal immigration in our country.”

“I don’t believe in open borders– the consequences for our family– so I believe this would, in many cases, erode public safety in our country. I don’t support the ‘defund the police’ movement, and I think Joe Biden too, needs to weigh in, because he’s starting to show support for efforts liket his,” Zeldin recommended.

“The radical left is controlling the party right now,” Rep. Zeldin said. “You’re seeing feckless leadership. People who may know better aren’t leading the radical elements of their party, instead they’re being led by them, they’re being rolled by them. The most important vote for Nancy Pelosi is her vote to be speaker. There’s no way she’s going to get to 218 votes without her continuing to pander to these voices. … Take this as a warning shot of what it would look like if these people actually ran everything.” Continued Below

The BREATHE Act has not been introduced. Under the bill, federal funds to local police and federal agencies would be slashed and diverted to pay for health care, education, environmental housing programs. It would eliminate federal programs and agencies used to finance Immigration and Customs Enforcement (ICE) and the controversial Department of Defense 1033 program, which transfers excess military equipment to civilian law enforcement agencies.

In addition, it would offer a 50 percent match of savings for states to close down detention facilities and prisons, the elimination of gang databases and the forgiving of all fees and surcharges within the justice system.

The reparations provisions include the passing the Commission to Study Reparation Proposal for African-Americans Act and establishing commissions to “design reparations” for mass incarceration to include those caught up in the War on Drugs, border and police violence and the “systemic violation of the U.S. Government’s treaty obligations to Tribal nations.” Video Below

Mayor DeBlasio is destroying our great city from the inside out. New York City will not make it through the remainder of his term. He needs to be immediately removed from office to save the city and protect the people who live there!pic.twitter.com/ktQbuvXFIj

We must invest in a new vision of public safety.

Today, I am proud to join the calls coming out of one of the largest movements for justice that my district and our country have ever seen to say unapologetically:

(Related: Rep. Tlaib To Those Who Are Against Abortion: “Maybe You Shouldn’t Even Want To Have Sex With Me … Or Any Woman”)