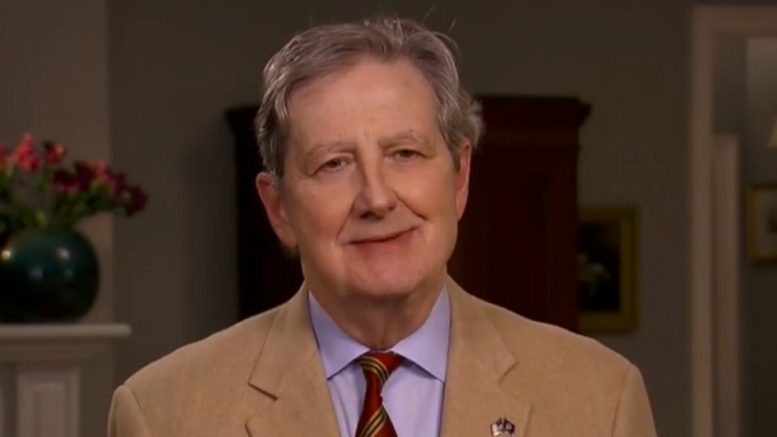 Kristof suggested “hope” will be in the form of “kicking President Trump out of the White House”, by writing, “Yes, our nation is a mess, but overlapping catastrophes have also created conditions that may finally let us extricate ourselves from the mire. The grim awareness of national failures — on the coronavirus, racism, health care and jobs — may be a necessary prelude to fixing our country.”

Senator John Kennedy said that he “read the opinion piece” and noted that it is “supposedly about hope”, then asked, “I mean, who can be against hope? That’s like hating Golden Retrievers”.

“But then you read the article, and it’s not about hope,” The Louisiana Senator pointed out. “Here’s what the article says, my words, not the authors; ‘America is a deprived country’. Most American’s he says, in my opinion, particular white Americans, are ‘racist and misogynistic and ignorant, they’re morons.'”

“And then the author goes on to say, my words, not his, that the ‘American people are so moronic that they can’t fix their country’. And so, the answer is to ‘turn America over to the managerial elites’, and by that, I mean the cultured, cosmopolitan, bacon-wrapped shrimp and tuna tar-tar crowd, who think they’re smarter and more virtuous than the American people,” Senator Kennedy expressed.

He went on to say: “And the author seems to think that the managerial elite is comprised of what I call the Ritz Carlton Democrats. Though, I will tell you, I know some big government Republicans who act the same way. In my opinion, if you believe this article, you were probably that kid in grade school who always ate the paste.” Continued Below

Shannon Bream noted that the author of The New York Times article puts the op-ed in the “context of ‘hey, listen, we’re awake when it comes to racial disparities and inequalities, when it comes to things that need to be fixed, any maybe all of this unrest'”, adding: “‘It’s a good thing leading us toward fixing those’. He doesn’t necessarily say former Vice President Joe Biden is the answer to all of those things, but seems to be drawing a map to what we could infer to sending us in that direction”.

Senator Kennedy also responded to another op-ed from Adam Brandon from The Hill, titled: Washington can afford no more spending for coronavirus relief, who wrote: “Democrats know their odds of taking the White House and the Senate hinge on the state of the economy. If this downturn is the new normal, as many left wing talking heads seem to want to be the real case, an extension of unemployment benefits is a stepping stone on the pathway toward universal basic income.”

Asked what does he think of the possibility of Republican’s being painted as “very stingy” at a time when “people across the country need” the Senate’s “help”, Kennedy said: “Well, that’s the way many members of the mainstream media always paint us. Why should this time be any different?” Continued Below

Senator Kennedy said the Senate is going to “start working on another coronavirus bill”, adding that he “doesn’t know whether it will pass”, or “what will be in it”.

“The only thing I’m certain of in this juncture is that it will not be Speaker Pelosi’s bill. She introduced what she calls the ‘Heroes Act’. I’ve read it. It reads more like the Communist manifesto, and I think it will probably be dead on arrival in the Senate,” he predicted.

The Louisiana Senator also noted that amid the coronavirus pandemic, “the captain of the ship always gets blamed fairly or unfairly”, referring to the President Trump, adding, “We’ll get through this. Some of my colleagues think we’ll get through it because of government.”

“They think government made America great. I don’t believe that. I think America was made great by ordinary people doing extraordinary things. …. Middle class Americans who will get us through this,” he expressed. Video Below