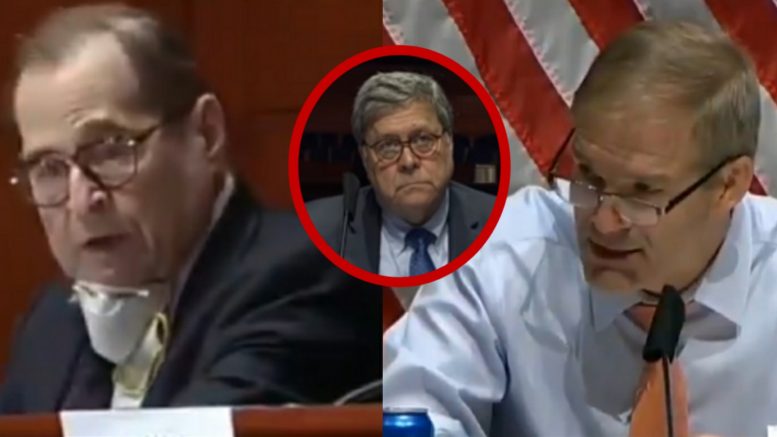 Democrats, including chairman Nadler, consistently used their time to attack the Attorney General and cut him off without allocating enough time to respond to notions presented.

Related Article: James Woods Roasts Hank Johnson Over His Grilling Session With Barr: “There Is No Stupider Human Being In America”

Congressman Jim Jordan (R-OH) called out Democrats’ antics and demanded that they give Attorney General Barr time to respond to accusations and questions asked. However, Nadler denied Jordan’s request and declared it as “irrelevant.”

“I don’t think we’ve ever had a hearing where the witness wasn’t allowed to respond to points made, questions asked and attacks made,” Jordan told Nadler.

“Not just in this hearing, not just in this committee, but in every committee I’ve been on, particularly given the fact that we have the Attorney General of the United States here,” he added. Continued Below

“The gentlemen does not have the time,” Nadler replied.

“I don’t want the time,” Jordan responded. “I just want the attorney general to be able to have enough time to respond to accusations and questions [you] ask him, and you guys not cut him off.”

“What you want is irrelevant,” Nadler replied. “It’s irrelevant to the rules.” Video Below