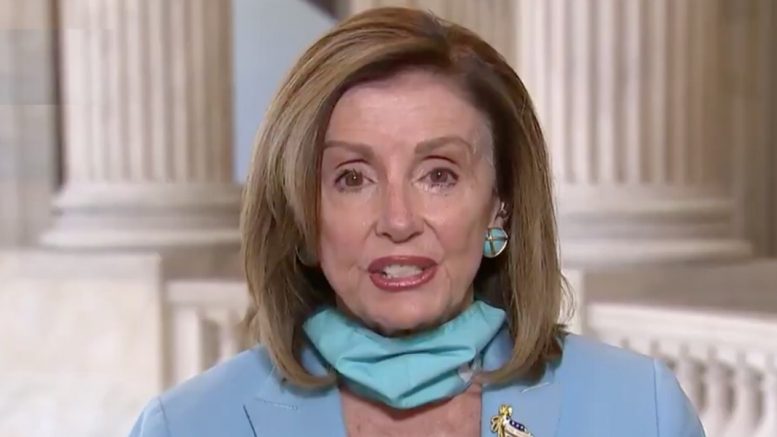 During an interview on “Fox & Friends” Wednesday, President Donald Trump said that his re-election campaign was exploring several options for the site of his Republican National Convention nomination acceptance speech later this month, including the South Lawn at the White House.

At the end of July, the president canceled the RNC events that were scheduled to take place in Jacksonville, Florida, amid an uptick in coronavirus cases in the state.

“We’re thinking about it,” President Trump said regarding giving a speech at the White House. “It would be the easiest from the standpoint of security. You know these, they move with a lot of people, it’s a very expensive operation militarily. And law enforcement-wise. The Secret Service is fantastic. But it’s a big deal.”

Following the the president’s remarks, House Speaker Nancy Pelosi (D-CA) vented her irritation over the Commander in Chief considering the possibility of delivering his convention acceptance speech from the White House South Lawn, calling the proposed move “very wrong.”

“For the President of the United States to degrade once again the White House, as he has done over and over again, by saying he’s going to completely politicize it, is something that should be rejected right out of hand,” Pelosi said during an interview on MSNBC Wednesday.

“It’s again, notion mongering, not serious thinking,” she said. “It won’t happen. Let’s put it that way, whether it’s legally wrong or ethically out of the question, it shouldn’t have been something that was expressed.” Continued Below

Asked if she can stop him, Pelosi replied: “He can’t do that. You can’t do that. I mean, you would be very surprised, I think, at the fact that when you’re at the White House, you’re talking about policy and rest. You’re not talking politics. We never did– you’d have a limited reference as it probably to our civic life, in terms of politics. But you don’t talk politics in the White House. And you don’t talk politics under the dome of the Capitol, except perhaps a reference to it, but not an event.”

She went on to claim that the president is “diverting attention from the fact that people are dying”, from the coronavirus, then added: “We’re talking about whether he can have a political event at the White House. He can’t. But again, it’s interesting, it’s curious, it’s a diversion. And that is what he is, a master of diversion.” Video Below

Speaker Pelosi says President Trump accepting the GOP nomination from the White House “is something that should be rejected right out of hand.”

“It’s a diversion, and that is what he is, a master of diversion.” pic.twitter.com/GUJWHnEw68

The possibility that Trump may deliver one of his most high-profile speeches at the White House has raised questions over whether it’s a violation of the Hatch Act, which prohibits federal government employees from participating in partisan political activity — although the president and vice president are exempt.

The Democratic National Convention Committee on Wednesday announced the party’s event will be completely virtual, with presumptive nominee Joe Biden no longer traveling to Milwaukee to deliver the acceptance speech. Biden will now deliver his keynote speech in his home state of Delaware, according to a news release.

Meanwhile, Pelosi was later asked in the interview regarding the DNC’s convention:

On @JoeBiden not going to Milwaukee, @SpeakerPelosi: "I think it's an indication of the seriousness with which he judges the situation-I commend him for doing that. It's going to be a great convention. People will see it virtually and we're very proud of him." #AMRstaff