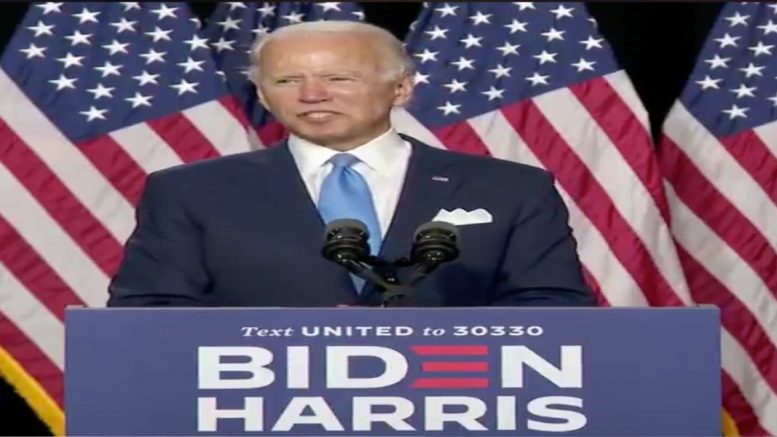 “It’s also the third anniversary of that terrible day in Charlottesville, remember? Remember what it felt like to see those neo-Nazi’s? Close your eyes– and those clansmen, white supremacists coming out of fields, carrying lighted torches, faces contorted, budging, veins, pouring in the streets of a historic American city, spewing the same anti-Semitic bile we heard in Hitler’s Germany in the 30’s,” Biden said.

“Remember how it felt to see a violent clash ensue between those celebrating hate and those standing against it?” Joe Biden asked.

Biden went on to say: “It was a wake up call for all of us as a country. And for me, it was a call to action. My father use to say, ‘Silence is complicity’, not original to him, but he believed it. At that moment I knew I couldn’t stand by and let Donald Trump– a man who went on to say when asked about what he thought, he said there were ‘very fine people on both sides’.”

“No president of the United States of America has ever said anything like that,” Biden said.

However, the Commander in Chief did in fact condemn the neo-Nazi’s and white supremacists. “You had some very bad people in that group. But you also had people that were very fine people on both sides. You had people in that group that were there to protest the taking down of, to them, a very, very important statue, and the renaming of a park from Robert E. Lee to another name. … I’m not talking about the neo-Nazis and white nationalists, because they should be condemned totally,” Trump said on August 2017. [Emphasis added]. Video Below

Joe Biden: "Today is not only the day I'm proud to introduce Sen. Harris…it's also the third anniversary of that terrible day in Charlottesville."

"It was a wake-up call for all of us as a country. For me, it was a call to action." https://t.co/6YmWkhQHPN pic.twitter.com/VO5bF65ESc

President Donald Trump: “I’m not talking about the neo-Nazis and the white nationalists, because they should be condemned totally”.

Here is the video of Trump saying it: “I’m not talking about the neo-Nazis and the white nationalists, because they should be condemned totally”

The full readout from President Trump’s remarks on Charlottesville:

Trump on Charlottesville, 2017: "Racism is evil.  And those who cause violence in its name are criminals and thugs, including the KKK, neo-Nazis, white supremacists, and other hate groups that are repugnant to everything we hold dear as Americans."
https://t.co/Z8nS9fMR2G

Joe Biden called the United Daughters Of The Confederacy "an organization made up of many fine people who continue to display the Confederate flag."pic.twitter.com/uWRNUCU4sO