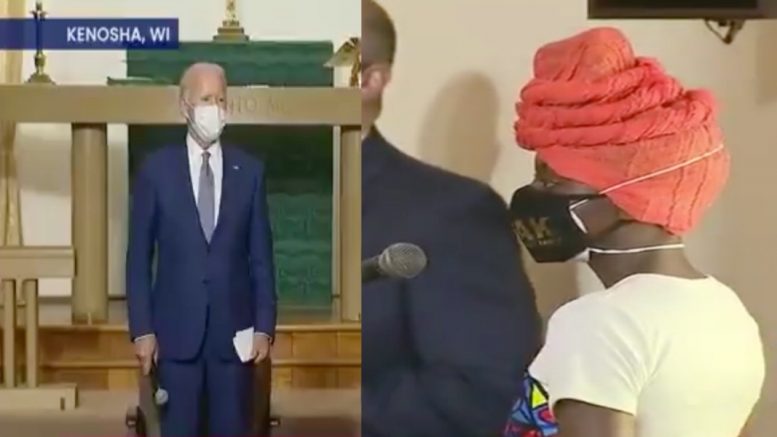 Democratic presidential nominee Joe Biden spoke at Grace Lutheran Church in Kenosha, Wisconsin Thursday and took a question from a local resident who voiced her concern over police officers.

However, it appeared Joe Biden’s team scripted a written question for the local resident to ask of the former vice president, as the woman named Portia Bennett informed Biden, “I was told to go off this paper, but I just can’t.”

“Hello, my name is Portia Bennett. I’m just going to be honest, Mr. Biden. I was told to go off this paper, but I can’t. You need the truth, and I’m part of the truth,” she told Biden.

“I was born here, raised here, first 8th grade class at the school that was named after his mother. So, I have to give you the truth of the people. And the truth of the matter is, we are heavily angry,” she continued.

“Not angry as to where people say, oh, they’re protesting. There’s a difference between a protester and a rioter. A very big difference. We protest to get our voices heard. We protest to show that not just blacks are tired of what’s going on. As you can see, there are blacks, whites, Muslims, Chinese, Hispanics that are out there,” Bennett stated.

“The changes that we want has to be more in effect. We heard so many people say, ‘Oh, we’re gonna give you this, we’re gonna give you that. But we have to see action. I was always raised to go off action and not words, because you’ll be let down every single time. And the action we want are hold these officers accountable to the same crimes that we get held accountable to,” she said. Video Below

Here's the full video of the woman who came up to the mic and says she was "told to go off this paper" if you're interested in hearing her full remarks to Joe Biden. pic.twitter.com/VAoCMaerWj

Following the shooting of Jacob Blake in Kenosha, Biden said on Thursday while speaking in the Lutheran Church to local residents: “Not going to lay out for you, I won’t now, because they’ll shoot me”.

In Kenosha, Wisconsin following the shooting of Jacob Blake, Joe Biden starts to rant about raising taxes and then catches himself:

"Not going to lay out for you, I won't now because they'll shoot me" pic.twitter.com/qoI2GrUfHq

Meanwhile, Biden also peddled the “very fine people” hoax, which has been widely debunked, and he also suggested that Black people and Hispanics only make 5 dollars an hour.

The Commander in Chief said on August 2017: “You had some very bad people in that group. But you also had people that were very fine people on both sides. You had people in that group that were there to protest the taking down of, to them, a very, very important statue, and the renaming of a park from Robert E. Lee to another name. … I’m not talking about the neo-Nazis and white nationalists, because they should be condemned totally,” [Emphasis added].

Joe Biden: "[Trump] said, 'There are very fine people on both sides.' No President has ever said anything like that." pic.twitter.com/O0Dkuzdt7s

Trump said: "I'm not talking about the neo-Nazis and the white nationalists, because they should be condemned totally"