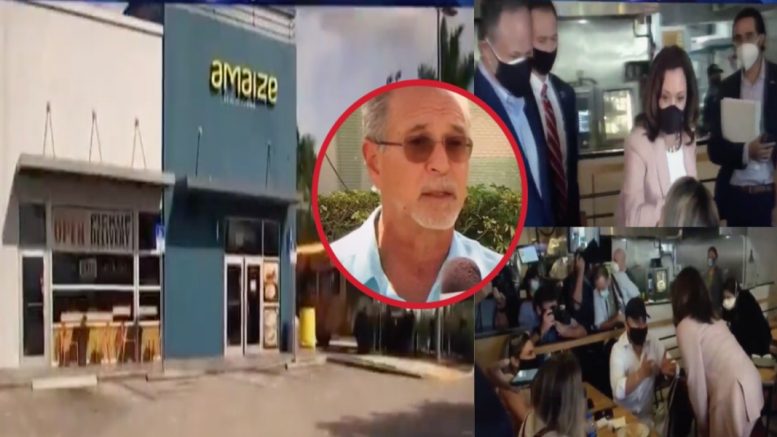 Senator Kamala Harris (D-CA) traveled with her husband Doug Emhoff last week to Florida and they stopped briefly between the airport and campaign events at Amaize, a Venezuelan restaurant in Doral.

While at the restaurant, Harris and Emhoff picked up arepas to go, and the California Democrat Senator reportedly chatted with diners and also took pictures with them.

However, the food stop for the the Democratic vice presidential nominee sparked tension with some Floridians and the president of the board of the directors of Amaize Latin Flavors in Doral.

“In respect to our stakeholders, we would not support that. If they would ask, we would say no, we are not going to do it.”

President Donald Trump is currently making headway in Florida with Latino, Hispanic, and Cuban voters according to an NBC poll, which was released last week.

As reported by NBC:

An NBC News/Marist poll released Tuesday showed Trump leading Biden among Latinos in Florida, 50%-46%. That survey found Trump and Biden virtually tied at 48% among likely voters in the state overall. The results came from phone interviews with 766 likely voters from Aug. 31 to Sunday — just after the Republican National Convention. The poll has a margin of error of plus or minus 4.5 percentage points.

Another survey of Miami-Dade County voters, shared Tuesday by Bendixen & Amandi International and The Miami Herald, also gave Trump a slight lead over Biden among Hispanic voters, though the result fell within the margin of error.

In Tuesday’s survey from Bendixen & Amandi, Cuban Americans broke for Trump over Biden by a whopping 38 percentage points.