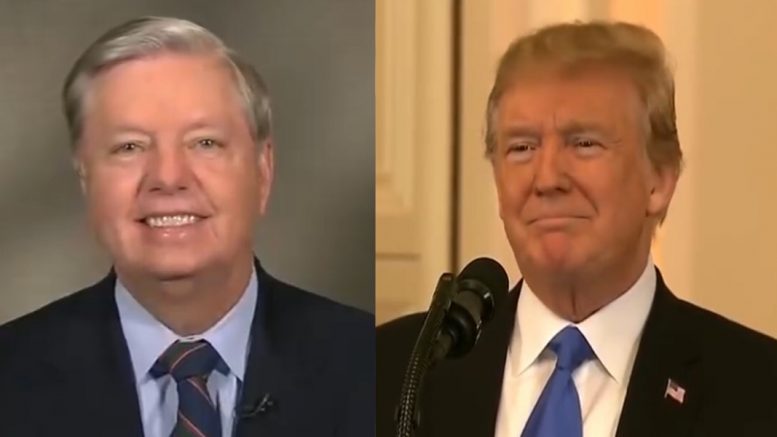 Senate Judiciary Chairman Lindsey Graham (R-SC) took to Twitter following the passing of Justice Ruth Ginsburg, announcing that he plans to support a vote on President Trump’s nominee to fill the vacancy left by Supreme Court Justice Ruth Bader Ginsburg, who passed away on Friday.

“It was with great sadness that I learned of the passing of Justice Ginsburg. Justice Ginsburg was a trailblazer who possessed tremendous passion for her causes. She served with honor and distinction as a member of the Supreme Court. While I had many differences with her on legal philosophy, I appreciate her service to our nation. My thoughts and prayers are with her family and friends. May she Rest In Peace,” Senator Graham expressed Friday.

On Saturday, the Commander in Chief issued a message directed towards Republicans, signaling he is ready to move forward on the process of selecting a Supreme Court Justice to replace Justice Ginsburg. Senator Graham responded, saying he “fully” understand[s] Trump’s desire to move quickly on filling the vacancy.

I fully understand where President @realDonaldTrump is coming from. https://t.co/qlhtEwTCdX

In a series of tweets, the Senate Judiciary Chairman announced on Saturday that he “will support President Donald Trump” to fill the vacancy for the highest court in the land, explaining his decision why.

“The two biggest changes regarding the Senate and judicial confirmations that have occurred in the last decade have come from Democrats. Harry Reid changed the rules to allow a simple majority vote for Circuit Court nominees dealing out the minority. *Chuck Schumer and his friends in the liberal media conspired to destroy the life of Brett Kavanaugh and hold that Supreme Court seat open,” Senator Graham tweeted.

“In light of these two events, I will support President @realDonaldTrump in any effort to move forward regarding the recent vacancy created by the passing of Justice Ginsburg,” the Judiciary chairman said. Video Below

The Judiciary Committee vets judicial nominees and must approve the nominee before a full confirmation vote on the Senate floor, CBS News noted.

The two biggest changes regarding the Senate and judicial confirmations that have occurred in the last decade have come from Democrats.

In light of these two events, I will support President @realDonaldTrump in any effort to move forward regarding the recent vacancy created by the passing of Justice Ginsburg.

Senator Graham also tweeted a video with remarks he made in 2019 Fox News interview:

I stand by what I said in Jan. 2019: Harry Reid & Chuck Schumer changed Senate rules to try and stack the courts for Obama. Now it's coming back to haunt them as I predicted. I'm dead set on confirming @realDonaldTrump’s nominee. If you stand with me: https://t.co/MYF6qgyjdI pic.twitter.com/lsejlSs0QQ

Senator Graham also took aim at at his Democratic challenger, Jaime Harrison, who opposed the nomination of Justice Brett Kavanaugh. He is facing an increasingly competitive reelection against Harrison. A Quinnipiac poll released this week showed the two as tied.

Jaime Harrison will be a loyal foot soldier in the cause of the radical liberals to destroy America as we know it.

As to me – I will be part of the Resistance and oppose their radical liberal agenda as they try to fundamentally change America.

The South Carolina senator also encouraged followers to “review” his most “recent statements” regarding “filling a Supreme Court vacancy”.

As to my view of filling a Supreme Court vacancy in 2020, I’d encourage you to review these most recent statements.