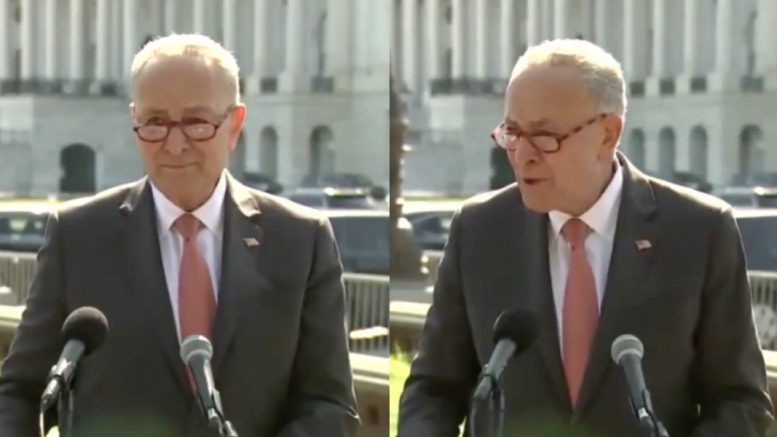 During an outdoor press conference on Tuesday, Senator Chuck Schumer (D-NY) was heckled towards the end of his remarks by a couple of people and was also confronted by a reporter over a previous statement he made regarding a Supreme Court vacancy in an election year.

Chuck Schumer: “Everything is on the table”:

Democrat Sen. Chuck Schumer threatens: if Democrats “get the majority back….everything is on the table”https://t.co/OOZEmcfkpM pic.twitter.com/kVFGZqLwfi

Schumer was confronted by a reporter about one of his tweets from 2016: “Democrats did an about-face– you tweeted out 4 years ago, ‘Senate has confirmed 17 SCOTUS Justices in presidential election years. #DoYourJob'”.

Schumer claimed, “Look– just look at that. It’s McConnell who changed the rules, not us.”

Asked if the Senate moved too fast when they confirmed Justice Ginsburg in 50 days, Schumer said, “Well, I’d have to go over the history there, but it wasn’t on the eve of an election like this is.” Video Below

Another reporter asked Schumer: “Do you think this sort of brings the importance of elections and voting into focus? I mean the reason why there’s likely gonna be a third conservative Justice in the court is because President Trump won won the election, Senate Republicans won the majority. What is the message now to Democrats in terms of the importance of winning elections?”

Reporter to Schumer: Isn’t the lesson that Democrats need to win more elections — that “President Trump won the election, that Senate Republicans won the majority”? pic.twitter.com/X57L7PwQKC

We leave you with hecklers who interrupted Schumer towards the end of his remarks: “Stop lying to the people… Jesus saves! Jesus love you guys!”