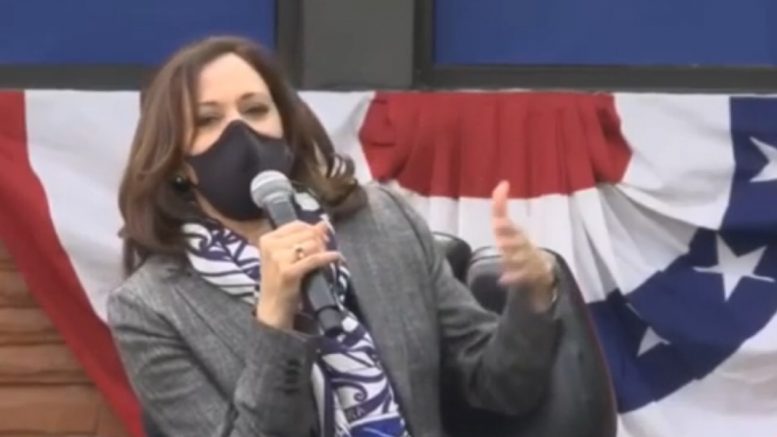 Democratic vice presidential nominee Kamala Harris participated in a “Shop Talk” roundtable at Headliners Barber Shop in Detroit, Michigan on Tuesday with Black men, who are reportedly leaders within Detroit, and implied that the only way to keep communities safe is to “reimagine public safety”.

A 22 year old man named Jeremiah asked Senator Kamala Harris (D-CA) on Tuesday, “Giving that America is built on racism, sexism, and other evils, how will you as Vice President advocate, whether through policy or just through the powers that you know you can advocate on, how will we resolve these injustices for the Black community and specifically for Black women?”

Harris appeared to agree with Jeremiah’s statement and said, “Yes. … Part of it is I’m gonna need your help, because one of the biggest problems on the topic that you have raised is the failure to speak truth about America’s history with race. You know right now, Donald Trump is trying to … get rid of the training in the federal government on race, on specific aspects on race– trying to wipe out history. … They are saying that …  we should stop teaching the truth about racism in America.”

“So, we have to talk about one … the need to have leadership that speaks the truth. I will do that. It is gonna have to be about not just talking, but it has to be about action. So here’s– for example: when we talk about, the other brother was asking about criminal justice,” she said.

“Let’s talk about America’s failure when it comes to understanding how you create safe communities. And by that, I mean this: it is outdated, it is wrongheaded thinking to think that the only way you’re gonna get communities to be safe is to put more police officers on the street,” Harris claimed.

“What we have to do and what we will do, is reimagine public safety,” Harris said. “And the way that you understand– and you want a safe community? You have to invest in the health and well-being of that community. What am I talking about?” Continued Below

“You can go to any upper-class middle suburb in America, and you will not see the kind of police presence you see in other neighborhoods. But what you will see, is well-funded public schools, … high rates of home ownership, … families that have an income that allows them to get through the end of the month without worrying if they can feed their children. … Small businesses that have access to capital. … Families that have access to health care that they can afford and mental health care that they can afford,” Harris continued.

“So if we want to build safe communities, we need to invest in the health of the communities. … A big part of my focus is what we need to do to expand mental health. [Be]cause let’s talk about that. We have so many of our children who have undiagnosed and untreated trauma, and then it manifests itself into all kinds of ways, because we simply are not dealing with it,” she said.

“…[Be]cause here’s the thing, poverty is trauma inducing. Going to school or going to sleep at night and hearing gun fire and being told, ‘Baby, just jump in the bathtub’ to avoid the stray bullet, is trauma inducing. And when we don’t address it, then it manifests itself in a number of ways,” the California Democrat Senator reiterated. Video Below

Do you think they will be "reimagining public safety" around Joe Biden's house? Not a chance. pic.twitter.com/i88srKM4C0

Fast forward to the 21:30 mark in the video for Kamala Harris’ full exchange with Jeremiah: