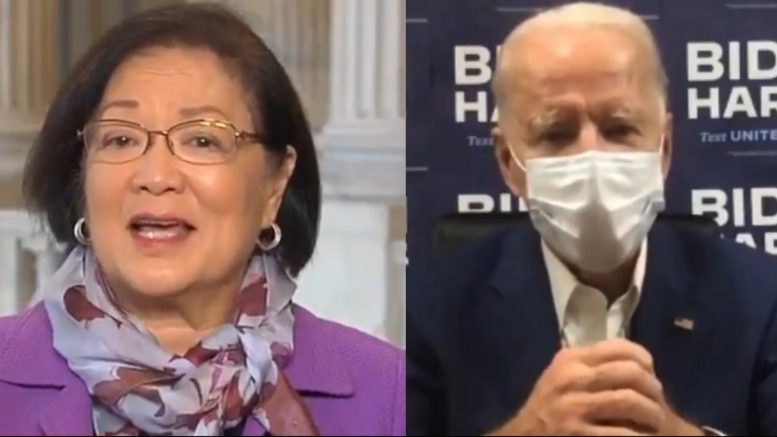 Democratic presidential nominee Joe Biden has been doing a lot of question dodging in wake of tensions stemming from President Trump and the Senate GOP moving to fill Justice Ruth Bader Ginsburg’s seat on Supreme Court.

Democrats have been threatening repercussions that include expanding the high court with additional justices if Republicans push to confirm a nominee before the 2020 election.

Asked whether or not he favors Supreme Court packing, Biden failed to answer and blamed President Trump and the upcoming debates for why he refused to disclose his stance.

“Let me tell you why I’m not gonna answer that question. Because if we shift all of the focus — that’s what [Trump] wants. He never wants to talk about the issue at hand. He always tries to change the subject,” the former Vice President said.

Joe Biden on court packing: “I’m not going to answer that question”https://t.co/474yMypd1T pic.twitter.com/FZhkF8oJSq

Democrat Senator Mazie Hirono had a much more blunt response when CNN’s John Berman pressed her on the same subject.

“Joe Biden was asked last night repeatedly if he wins the election, would he favor adding more justices in Supreme Court. He would not answer that question. Where do you stand on that?” Berman asked.

“This is long, overdue court reform as long as I’m concerned, and I’ve been thinking about court reform and what we can do regarding the Supreme Court to make it so much more objective,” Hirono replied.

“After the election, we only have a serious discussion about any of these things if the Democrats take back the Senate,” she concluded. Video Below

Democrat Sen. Mazie Hirono insists court packing is “long overdue,” and is to be discussed “if the Democrats take back the Senate”https://t.co/fN9MwfWTD6 pic.twitter.com/EwQ1HA6CJV