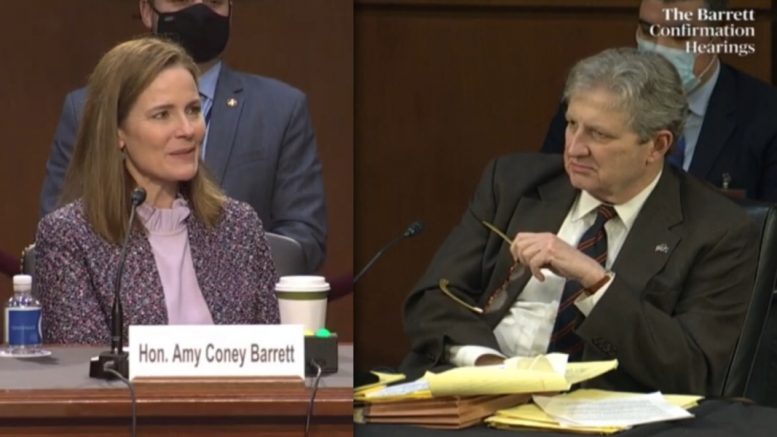 The Louisiana Senator directly asked Judge Barrett, “Are you a racist?”, which she responded, “I am not a racist, Senator Kennedy”.

On Tuesday, Judge Barrett addressed attacks on her family and her two adopted children, Vivian and John Peter, from Haiti, during Tuesday’s confirmation hearing. “They are my children who we love and who we brought home and made part of our family,” Barrett said, “and accusations like that are cruel.”

Senator Kennedy continued: “Are you against clean air, bright water, and environmental justice?”, which prompted Judge Barrett to say, “I’m not against any of those things. Those are polices that the Congress has pursued in many statutes, and I think we all reap the benefits of when those statues work.” Continued Below

“Do you support science,” Sen. Kennedy then asked.

“I do. And I help my children with their homework when they’re trying to learn it,” Barrett said. “… I’m sure I believe in science and support science.”

Judge Barrett burst into laugher, then said, “I do not hate little warm puppies.”

“Okay. I just wanted to get all that clear,” the Louisiana Senator noted. “See, we did that in about two minutes.”

(Related: Sen. Kennedy Calls Out Coons For Implying Barrett Is A Liar Over Election Recusal: “No Basis Whatsoever For Making That Accusation”)