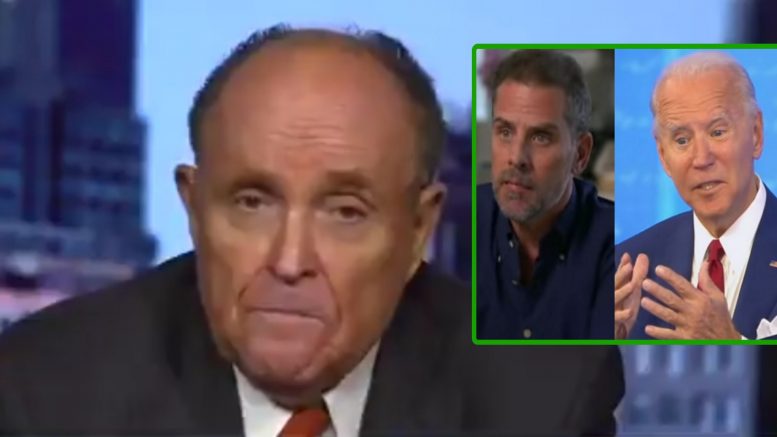 Former New York City Mayor Rudy Giuliani believes there is now more than enough evidence to “convict” members of the Biden family, given several pieces of information that’s been handed over to the FBI and Department of Justice within the past year, as well as files that were allegedly discovered on a laptop belonging to Joe Biden’s son Hunter.

Both the New York Post and Mr. Giuliani have been presenting some of the biggest bombshells uncovered within thousands of emails purportedly belonging to Hunter Biden, including evidence that a business meeting may have taken place between former Vice President Biden and a Ukranian executive.

Another email that was discovered on the laptop appears to show Hunter Biden cutting his father in on a lucrative energy business deal in China that he was pursuing. The thread has since been verified as authentic by one of its recipients, Fox News reported.

In wake of the latest revelations, Giuliani vented his frustration with the FBI and DOJ for doing nothing as more and more damning evidence continues to be handed over to them involving the Biden family.

“Given the evidence that I’ve turned over to them going back to January of last year, there’s enough for a conviction,” Rudy told Fox Business host Lou Dobbs. “This is about as easy a case as you’re gonna get at this level.”

“You’ve got five witnesses, you’ve got video confession, you’ve got now emails that are now damning  and you have an explanation of the distribution of the illegal money that Hunter Biden provides. And there are more emails and texts that  explain how Hunter Biden divides the money and the father gets some of the money,” he added.

Related Article: House GOP Sends A Letter To Wray For Answers Over Whether The FBI Had Hunter Biden’s Reported Laptop During Trump’s Impeachment

Giuliani went on to say that he thinks there must come a time when Attorney General William Barr and FBI Director Christopher Wray need to meet with the President and tell him “what the hell they are doing” all evidence that shows wrongdoing committed by members of the highest levels of government.

Biden Corruption: @RudyGiuliani says there’s enough evidence for a conviction in the Biden corruption case & so far our FBI, DOJ have done nothing about it. #MAGA #AmericaFirst #Dobbs pic.twitter.com/jz8NOnvU68