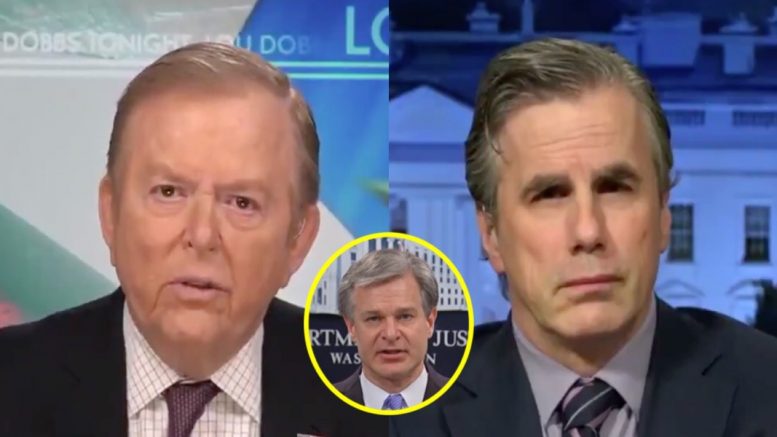 Fox Business’ Lou Dobbs, on Monday, revealed that the FBI has an investigative team looking into the 2020 election according to “a highly reliable source”.

Following his announcement, President of Judicial Watch, Tom Fitton, spoke Dobbs and indicated that “there is more than enough information” tying foreign entities to our electoral systems for the FBI and the Department of Homeland Security to investigate the 2020 election.

Lou Dobbs reports on the FBI:

BREAKING: @LouDobbs says the FBI has an investigative team looking into the 2020 Election according to a "a highly reliable source". pic.twitter.com/945u4pEfmy

Lou Dobbs told Tom Fitton: “The president is well within his rights to demand an accounting immediately from FBI agents who could just walk across the street, figuratively speaking, to see the executives of Dominion [Voting Systems]. It’s time to get some damn answers, don’t you think?”

Fitton responded: “There is more than enough information, especially given the foreign connections with some of these firms we’ve been discussing, for the FBI to be doing an investigation, certainly the Department of Homeland Security as well. We’ve been told for four years we need to be worried about foreign interference in our elections, and here we have information tying foreign nationals and foreign influenced entities to our disputed vote counting in these states.”

“In my view, there’s more than enough, certainly in Pennsylvania, for the state legislature to pause in deciding whether or not to certify the electoral college counts as seemingly coming up in the current tallies,” he added. Continued Below

“You and I both know, screwing around with this in any way and letting this outrage prevail, is the likely end of this Republic. Do you disagree?” Dobbs asked Fitton.

“I don’t disagree. My concern is we should be doing everything. As soon as they paused counting in Philadelphia, they should have sent U.S. Marshalls up there to see what was going on,” the Judicial Watch president recommended.

“And they didn’t. And now it’s two weeks later and no matter what the FBI does– the FBI and the Justice Department should do whatever it’s able to do under law to investigate this evidence of misconduct and fraud. The state legislatures have the core constitutional authority to fix it. Same goes to Congress in the end, none of it’s reliable, I understand, but we need to push,” Fitton insisted. Video Below

“This president has to lead that fight. And this president, I will tell you Tom, I pray he doesn’t for a moment tolerate anyone sitting down with him in the Oval Office and suggesting that he concede in any way, because now is the time to fight harder than ever. And no one fights harder than this president,” Dobbs said.

Fitton added that President Trump should not allow any transition, “specifically with Joe Biden, until after he’s certified by Congress in January”.

Attorney General William Barr authorized last week, federal prosecutors across the U.S. to pursue “substantial allegations” of voting irregularities, if they exist, before the 2020 presidential election is certified.

Foreign Interference: @TomFitton says there is more than enough evidence tying foreign entities to our electoral systems for the FBI & DHS to investigate and state legislatures must not certify results until those probes take place #MAGA #AmericaFirst #Dobbs pic.twitter.com/mjIvHFf1Yj

(Related: Sidney Powell Claims To Have Enough Evidence To Prove ‘Millions’ Of Votes Were Fraudulently Shifted From Trump)