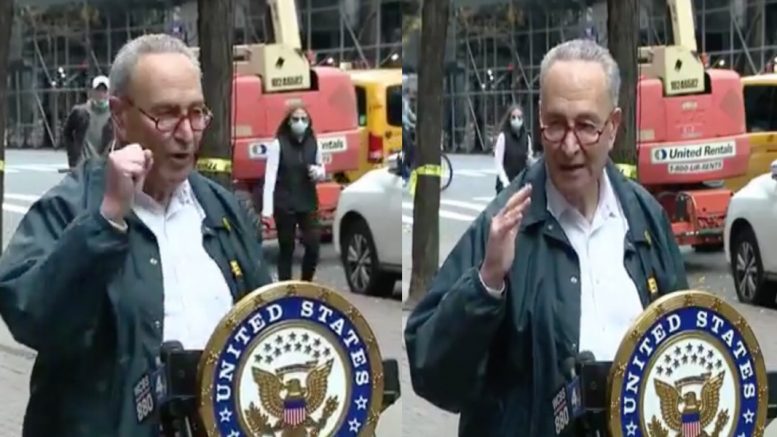 Senator Chuck Schumer (D-NY) on Sunday, vented his irritation at Republicans who are notably standing with President Donald Trump as litigation and recounts peruse in the wake of the November election.

“The Republicans should [stop] spending all their time saying the election wasn’t legitimate. We know it’s legitimate,” Schumer alleged.

“Now work with us to get a COVID bill done, [be]cause that’s the agenda that’s on– that’s the item that’s on the agenda that the America people want and want badly,” he said without mentioning the previous bills Senate Republicans tried to pass, which Democrats twice blocked the Senate from taking up the COVID relief legislation.

“It’s time to move on. The election is over. There wasn’t fraud, there wasn’t anything else,” Schumer insisted. “Six states, swings states, flipped from Trump to Biden. Those six states, each of them, the margin is not even close.”

“No court is gonna overturn this election. Joe Biden will be installed as president,” he claimed. “So Republicans, get over it. Stop spending all your time spreading lies about the election and instead, roll up your sleeves, sit down with us, do a COVID bill that that New York and America needs. No more temper tantrums. No more stomping your feet. Get something done to help New York and get us relief from COVID.” Video Below

Sen. Schumer: "No court is going to overturn this election — Joe Biden will be installed as president." pic.twitter.com/FDobbqczJK

On Monday, President Donald Trump declared on Twitter, “I won the Election!”

Twitter added a label to his tweet, claiming that “official sources” called the election differently, though the states have not officially certified a winner yet.

I won the Election!

He tweeted the same on Sunday night.

I WON THE ELECTION!

President Trump also announced on Sunday, “I concede NOTHING!”

He only won in the eyes of the FAKE NEWS MEDIA. I concede NOTHING! We have a long way to go. This was a RIGGED ELECTION!

Why does the Fake News Media continuously assume that Joe Biden will ascend to the Presidency, not even allowing our side to show, which we are just getting ready to do, how badly shattered and violated our great Constitution has been in the 2020 Election. It was attacked,..

….owned Dominion Voting Systems, turned down by Texas and many others because it was not good or secure, those responsible for the safeguarding of our Constitution cannot allow the Fake results of the 2020 Mail-In Election to stand. The World is watching!