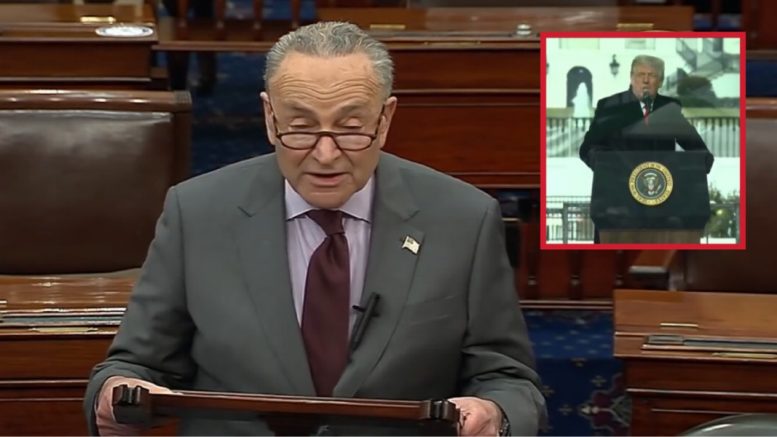 While speaking on the Senate floor Friday, Senator Chuck Schumer (D-NY) announced that the Article of Impeachment against former President Donald Trump will be delivered to the Senate on Monday.

In his remarks, however, Schumer made a very apparent flub when asserting that “Senators will have to decide if they believe Donald John Trump incited insurrection against the United States.”

“The Senate will also conduct a second impeachment trial for Donald Trump. I’ve been speaking to the Republican leader (Sen. Mitch McConnell) about the timing and duration of the trial. But make no mistake, a trial will be held in the United States Senate, and there will be a vote whether to convict the president,” said Senator Chuck Schumer.

“I’ve spoke to Speaker Pelosi, who informed me that the Articles will be delivered to the Senate on Monday,” he stated.

Schumer continued, “… It makes no sense whatsoever that a president or any official could commit a heinous crime against our country and then be permitted to resign to avoid accountably and a vote to disbar them from future office. It makes no sense. Regardless, the purveyors of this unusual argument are trying to delay the inevitable.”

“The fact is: the House will deliver the Article of Impeachment to the Senate. The Senate will conduct a trial of the impeachment to Donald Trump. It will be a full trial. It will be a fair trial. But make no mistake, there will be a trial and when that trial ends, Senators will have to decide if they believe Donald John Trump incited the erection– insurrection– against the United States,” Schumer said. Video Below

Meanwhile, Schumer was not the only one this week to make the same mistake when speaking of “insurrection”. CNN’s Anderson Cooper also used the word “erection”, though he immediately corrected himself.

(Related: Protester Lashes Out On Schumer During His Press Conference: “You’re Nothing But A Coward”)